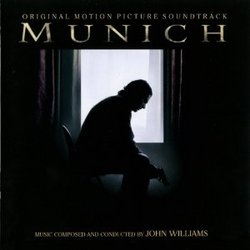 What a fruitful year it\'s been for award-winning composer John Williams. He wrote his final Star Wars score. He scored a Steven Spielberg summer action movie (War of the Worlds). He scored a period drama (Memoirs of a Geisha). To finish off the year, he scored another Spielberg movie - this time, the dark dramatic thriller Munich. The film tells the story about the aftermath of the massacre of the Israeli Olympic team at 1972\'s Olympic Games.

Avner (Eric Bana) is a Mossad agent who is recruited to head up a secret-ops team that will travel around Europe, find eleven "marked targets", and take them out through various clandestine means. After Avner connects up with Louis, a Frenchman whose family has made a living by selling information, he starts dispatching of the targets, and Louis keeps providing names. However, things start to go south, as Avner begins to quesiton what he\'s doing, and wonder if the men he\'s killing are actually involved with Munich. When members of his own team become targets themselves, Avner feels he\'s gone too far, and tries to pull out before he and his family get hit.

As with Memoirs of a Geisha, Williams hones his main themes down to solo instruments: Listbeth Scott on vocals, Steve Erdody on cello, Gloria Cheng on piano, John Ellis on oboe, Pedro Eustache on woodwind, and Adam del Monte on guitar. When not dealing with thematic material, the music is tense, dissonant at times, and even uses electronic loops to increate anxiety.

For the flashbacks involving the Olympic attack, two themes are used. The first - the very mournful Middle-Eastern edged Munich Theme - is performed in what sounds like Hebrew by Lisbeth Scott ("Munich, 1972" and "Remembering Munich"), as well as on oboe ("Avner and Daphna"). The other theme, which I call the Black September Theme, is a tense yet sad one, played in deep string octaves, and heard in "The Attack on the Olympic Village" and "The Tarmac at Munich".

The core emotional theme of the film, representing Avner\'s inner struggle, is Avner\'s Theme, heard prominently in "Prayer For Peace". It is used multiple times on the album in various forms: full and lush ("Bearing the Burden", "End Credits"), solo guitar ("Avner\'s Theme"), solo cello ("Bonding"), and oboe ("Discovering Hans"). It is a very sad theme that feels heavy, and grows on you the more you listen to it.

The other tracks tend to be ambient-heavy tense cues, with cimbalom, dissonant strings, and even electronic loops to provide low-end tension. Cues like "Letter Bombs" and "Stalking Carl" will not get many repeat plays in your stereo, but they work very effectively in the film. Williams also gives us his own take on "Hatikva (The Hope)", the Israeli national anthem, in a lush, moving arrangement.

The "End Credits" track stands out for Erdody and Chen, allowing these soloists to really showcase their skills. With a few standout themes played multiple times, by the time the album is finished you\'ll have such in-depth familiarity with them that you can\'t get them out of your head. After seeing the film, I believe that Williams\' score to Munich ranks higher compared to Memoirs of a Geisha, and is a dark emotional contender for best score of the year.