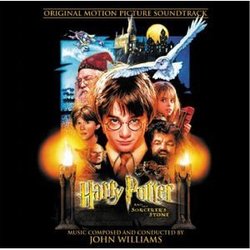 Harry Potter and the Sorcerer's Stone

Harry Potter, the boy magician who is the subject of an incredibly successful series of books by author J.K. Rowling, hits the big screen in the film version of Harry Potter and the Sorcerer's Stone.  Directed by Chris Columbus (Home Alone), the two-and-a-half hour long film follows Harry (Daniel Radcliffe) and his friends as they experience their first year at the Hogwarts School of Witchcraft and Wizardry - and solve a mystery to boot.  The film is a highly entertaining one, filled with plenty of interesting moments and exciting sequences.  The performances are rather well done, considering that the leads are (for the most part) children.  The adult performers, including Richard Harris, Maggie Smith and Robbie Coltrane all do fine jobs, but I felt that Alan Rickman's Professor Snape was the most interesting and subtle performance in the film.  Not so subtle, however, is the highly thematic and occasionally overused musical score, composed by John Williams.

Fans of Williams and his work will no doubt be delighted with this score.  With a few strong themes, it's a close cousin to his work on Hook and The Witches of Eastwick, with a dash of Home Alone.  In "Prologue", the strings swirling around as the brass plays the main theme - it will be heard in a larger statement later on in the score.  "Harry's Wondrous World" is a concert arrangement that contains the secondary theme, a sweeping upbeat melody filled with wonder that grows until we hear a new third theme.  For some reason, I kept thinking of Empire of the Sun - it's that good and powerful.

From there we actually get into the underscore of the film, beginning with "The Arrival of Baby Harry" - a dark and mysterious cue as we first meet Headmaster Dumbledore (Harris), Professor McGonagall (Smith), and Rubeus Hagrid (Coltrane) as they deliver baby Harry Potter to his aunt and uncle who will raise him until he is ready to go to school.  In this cue the main theme is played out with full orchestra and choir, but ends on a quieter note. "Visit to the Zoo and Letters From Hogwarts" is primarily a playful cue that builds to a sweeping crescendo with (yet another) reprise of the main theme.  Harry goes shopping for school in "Diagon Alley / The Gringotts Vault", a smaller more introspective bit of playful underscore that turns a bit more dark and sinister as the film's plot begins to take shape.   The trend in many of the score cues seems to be, for the most part, "underscore the action, then have a sweeping statement of one of the main themes".  As good as they are, they start to get a bit repetitive after a while.

"Mr. Longbottom Flies" is a good example of that formula.  Starting out soft with underscore that matches the picture, the cue eventually swells to a climax with a re-statement of the secondary theme.  "The Norwegian Ridgeback and A Change of Season" contains a nice bit of sweeping music in the classic Williams style.  One of the highlights of the album (and the film) is "The Quidditch Match".  Running eight and a half minutes long, this sequence is tense and exciting - Williams enters his classic "action" mode, with all the right orchestra hits, ostinatos, and staccato brass.  It's hard not to think of Star Wars a bit when listening to this cue - although the theme is different, the structure is similar.  "Christmas at Hogwarts" contains a bit of haunted caroling backed with eerie atmosphere, which shows up only for 5 seconds in the film.

"Fluffy's Harp" is the closest thing to "source music" heard in the film, even though it's really a bit of underscore - primarily performed on harp, of course.  A bit of horror music and tremolo strings come out during "In the Devil's Snare and The Flying Keys", and medieval percussion (reminding me a bit of Williams's work on Return of the Jedi during the Ewok fight) show up in "The Chess Game".  The dramatic climax of the film takes place during "The Face of Voldermort", and the tender resolution shows up in "Leaving Hogwarts".

Capping off the album is a concert version of "Hedwig's Theme", and it's quite a nice way to end this 73-minute long album.  There are plenty of cues that are missing from the album, but it is certainly a solid listen nonetheless, and most fans won't be complaining too much.  Williams delivered the goods, exactly as I had hoped.  While the themes are strong, they get a bit repetitive after a while.  Thankfully, though, there is enough variety in their presentation and the general underscore to keep the album interesting.  Filled with the classic "Williams touch", Harry Potter and the Sorcerer's Stone is a worthy addition to your film score collection.