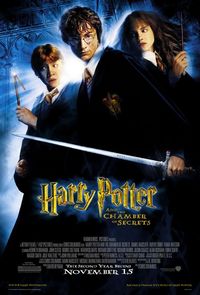 Harry Potter and the Chamber of Secrets

The worldwide phenomenon of Harry Potter has persisted for over a decade.  With six films already released, and two more in the works, the seven-book series has shown no indication of slowing down.  When it was released in November 2002, the second film, Harry Potter and the Chamber of Secrets (based on the novel of the same name) was a box office sensation, taking in over $870 million worldwide.

Following the events in Harry Potter and the Sorcerer's Stone, we find our young titular hero (Daniel Radcliffe) forewarned by Dobby the House Elf not to return for his second year at Hogwarts School of Witchcraft and Wizardry, because terrible things will happen if he does.  Of course, he returns, and soon strange things start to happen to students, and the legend of a secret chamber hidden beneath the school housing a terrible monster starts to resurface.  Naturally, Harry and his good friends Ron (Rupert Grint) and the bookish Hermione (Emma Watson) work to figure out what's going on - and soon discover that (like everything in these films) it has to do with the impending return of the evil Lord Voldermort.

Building on the foundation established in the first film, Chamber of Secrets is more engaging, and darker than its predecessor, but like the first film, assumes that everyone seeing the film has read the books.  As a result, it feels a little rushed - even though it runs over 2.5 hours - and might require revisiting the novel to fill in the gaps.  The visual effects are improved from the first film, and as the fame-obsessed Professor Gilderoy Lockhart, Kenneth Branagh is a fresh treat to watch on screen.

Previously released as a 2-disc Special Edition DVD, and then a single-disc Blu-ray, Harry Potter and the Chamber of Secrets finally gets the treatment it deserves, in a new "Ultimate Edition".  This four disc set includes a Blu-ray of the film (featuring both the theatrical version, and a new extended cut), a Blu-ray supplement disc, a DVD supplement disc, and a Digital Copy.  The video quality on the Blu-ray is solid, sporting a rich and detailed transfer of the film with a bit of naturalistic film grain.  It appears that the bitrate is a little higher than the previous Blu-ray, making this a slight improvement in quality over the previous HD releases.  Audio is presented in a new DTS-HD Master Audio 6.1 track, which effectively reproduces dialogue, creates a nicely immersive soundscape, and showcases John Williams and William Ross's magical underscore.  Additional audio options include Dolby Digital 5.1 French, Spanish, and Portuguese.

Extras begin with the extended cut of the film, which adds 14-minutes to the running time, bringing it to just under 3-hours in length.  The main differences that I could discern is that they added in all the deleted scenes (more on that later), and the English audio DTS-HD 5.1 instead of 6.1.  The big extra on the first disc is the new In-Movie Experience with Director Chris Columbus.  Available only for the theatrical version of the film, this is basically the commentary track that everyone wanted years ago, but now with more bells and whistles.  Picture-in-picture footage of Columbus talking to us, behind-the-scenes footage, and storyboard comparisons all appear in a box in the lower-right of the screen as the movie plays.  There are a few gaps, but you can skip to the next section just by pressing the right-arrow on your remote.  Additionally, when prompted, you can click on your remote to enter galleries of production artwork pertaining to sequences that you're watching. And since the Columbus commentary bits were all done relatively recently, they're filled with fresh insight (and hindsight) now that six of the films have been made.  This is a great and worthwhile extra!  The only other extra on the first disc is access to the BD-Live area, where (as of this review) the only downloadable extra was actor Tom Felton ("Draco Malfoy") pitching the new Blu-ray for Harry Potter and the Half-Blood Prince.  Hopefully there will be more interesting stuff to follow.

The second disc starts out with the second chapter of what will end up being an 8-part documentary covering nearly every aspect of the Harry Potter films, Creating the World of Harry Potter.  The idea being that each film will get a different part of the documentary, and Chamber of Secrets being the second film, we are presented with a rather impressive and comprehensive look at "Part 2: Characters" (HD, 80-minutes).  All of the principle actors are covered here, showing them growing up (literally) before our eyes, as well as some of the special character actors that have been in the film series, reflecting on their experiences.  Much is talked about the casting process (especially the children's auditions) and the special relationship that Daniel Radcliffe had with the late Richard Harris, who played Professor Dumbledore in the first two films.  It's a fantastic piece, and it's exciting to see that tentatively scheduled for The Goblet of Fire Ultimate Edition is "Part 4: The Music of Harry Potter"!

Next up is "Harry Potter and the Chamber of Secrets... Revealed!" (SD, 13-minutes), a quick EPK-styled puff piece that was culled together when the film was released, with a cursory behind-the-scenes look at the film.  We are provided with two "Screen Tests" (HD, 12-minutes), featuring Daniel Radcliffe, and then Radcliffe with Grint and Watson, reading scenes from the first Harry Potter film.  It's almost shocking to see how young they are!  A collection of 19 "Deleted Scenes" (HD, 17-minutes) are included, containing little bits and moments that were not in the theatrical version of the film - but are all tossed back into the "Extended Cut" of the film on Disc 1. Finally, the original "Teaser Trailer" (SD, 2-minutes) and "Theatrical Trailer" (HD, 2-minutes) are provided, as well as a collection of 17 "Television Spots" (SD, 9-minutes) round out the disc.

The third disc is a DVD - in fact, it's the second disc from the original 2-disc DVD release!  This is good, because it means that this Ultimate Edition includes all of the previously released extras for the film - so you're not missing out on anything.  The downside is that the menu interface for this disc is presented mainly for kids, with an exploratory approach necessary to navigate and "discover" the various tidbits and extras, through games and other gimmicky methods.  There are some gems here, though, including a "Conversation with J.K. Rowling and Steve Cloves" (SD, 16-minutes)  and "Build a Scene" (SD, 17-minutes) which is a really nice comprehensive look at the making of a sequence, from the production design, sets, filming, editing, music, visual effects and more.

Packaging for the Chamber of Secrets Ultimate Edition is rather lavish, with a nice case that opens up to allow you to remove the fold-out containing the three discs.  There's an envelope containing the fourth disc (Digital Copy) as well as two "Character Cards" (Severus Snape and Rubeus Hagrid).  Finally, there's a very nice 48-page hardcover full-color book, "Creating the Characters of Harry Potter", which ties into the "Part 2" documentary.  This book features costume design sketches, photos, glamour shots, and production art, from all of the six released films, with an obvious emphasis on the characters of the series.

This Ultimate Edition of Harry Potter and the Chamber of Secrets is simply a must-have for any Harry Potter fan.  We're finally given the nicely in-depth behind-the-scenes material that had been missing from previous releases, and the nearly feature-length documentary on the characters of the series is exceptional. The only drawback is that if you've already plopped down your cash for the 2-disc DVD and then the 1-disc Blu-ray, you'll feel like you're triple-dipping.  But trust me on this - it's worth the upgrade.