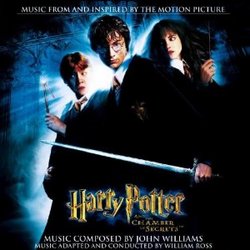 Harry Potter and the Chamber of Secrets

Review: Harry Potter and the Chamber of Secrets

Harry Potter and the Chamber of Secrets finds young Mr. Potter more than eager to begin his second year at Hogwarts School of Witchcraft and Wizardry.  He is warned not to return, however, by a piece of CGI named Dobby (a far superior cousin of Jar-Jar), and of course ignores this advice (otherwise the film would last 10 minutes).  Soon after his arrival, a malevolent being begins to prey on the students at the school.  Harry is named as a suspect and has to dodge wicked students, malicious teachers, and he-who-must-not-be-named, with the help of loyal friends, teachers, and birds.

Chris Columbus wrote in the liner notes that John Williams retained many of the same themes from Harry Potter and the Philosopher's Stone (or Sorcerer's Stone to us Yanks), but that the score is new and strong on its own.  I wholeheartedly agree.  As he did with the score for Star Wars: Attack of the Clones, Williams has created music as superior to the first score as the sequel is superior to the first film.

With "Prologue: Book II and the Escape from the Dursleys," Mr. Williams breezily reintroduces most of the Potter themes and then gets down to business.  "Fawkes the Phoenix" is Williams at his lofty, inspirational, E.T.-cum-Jurassic Park best, while "The Chamber of Secrets" is just plain good and scary.  In "Meeting Tom Riddle," Williams writes terror with subtle strokes.  He hints at evil without showing the entire monster, in much the same way that the better Jaws films showed only glimpses of the shark rather than the entire fish (and yes, a shark is a fish, not a mammal – but I digress).  When Williams finally reaches the inevitable epic conclusion in "Meeting Tom Riddle," you've been prepared and the trip is well worth the wait.

If the score has a fault, it is its similarity to the Philosopher's Stone score.  The recurring themes are omnipresent.  However, if you enjoyed Philosopher's Stone, this is not fault at all.  Besides, the new themes ("Fawkes the Phoenix," "Fawkes is Reborn," "Meeting Tom Riddle," "Dueling the Basilisk") are extraordinary.  There are also several enjoyable Williams-reminisces, such as the almost eerie similarity between parts of "The Dueling Club" and "X Marks the Spot" from Williams' soundtrack for Indiana Jones and the Last Crusade.  At various times, Williams also summons the spirits of Star Wars, Empire Strikes Back, Raiders of the Lost Ark, Jaws, and the aforementioned E.T.: The Extra-Terrestrial, and, of course, Jurassic Park.

The final gift on the album is "Dueling the Basilisk," turning the theme developed in "Fawkes the Phoenix" into an edgier piece, using the ever-familiar-Williams-use of brass flourishes and tightly-controlled percussive explosions, while still finding room for the choir to fill out the minor key.

All in all, it's a good listen, and a solid album clocking in at just over 70 minutes of music.  It should be noted that composer William Ross is credited with arranging additional music on this album, and he must have done an excellent job, since you can't tell where to draw the line between his work, and Williams'.  If you liked the first one, you'll like this one even more.  If you didn't like the first one, well, The Lord of the Rings: The Two Towers has already hit the shelves...