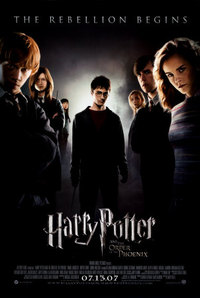 Harry Potter and the Order of the Phoenix

Review: Harry Potter and the Order of the Phoenix

It\'s been 1.5 years since we last had a Harry Potter film, and Harry Potter and the Order of the Phoenix (aka Book 5) will hit theaters next week. Continuing the story from Harry Potter and the Goblet of Fire, we find our hero (Daniel Radcliffe) being accused of lying about the Dark Lord Voldermort\'s return. Minister Cornelius Fudge (Robert Hardy) refuses to consider that as a possibility, instead believing there to be some kind of sinister plot of misinformation by Professor Dumbledor (Michael Gambon) to take over the Ministry of Magic. However not everyone is so blind, and we learn of the secret Order of the Phoenix, headquartered at the house of Harry\'s godfather, Sirius Black (Gary Oldman).

Unfortunately, the idea that Harry is lying about Voldermort carries over into his school experience, where people don\'t believe him, and he finds himself increasingly isolated by his classmates. Even worse, Fudge has sent over Dolores Umbridge (Imelda Staunton) to keep an eye on things, and soon she starts taking control of the school, and even goes so far as to make the Defense Against the Dark Arts class a theoretical course, instead of a practical one. Soon Harry is convinced to start covertly teaching the students how to fight back, especially since Voldermort is a growing threat - he\'s even trying to tap into Harry\'s mind!

Harry Potter and the Order of the Phoenix is a better film than I had expected, mainly because it manages to pack a lot of information and details into the film. The book was a behemoth, and a lot had to occur to get us to the next book/film. Ultimately, this is a transitory film, with a lot of set up and not as much payoff, but it\'s done in an entertaining and engaging way.

Director David Yates sets things up nicely, keeping us on edge and always hinting at a bit more darkness to follow. The look of the film is consistent with the previous two, with a muted color palette giving the film a drab, uneasy tone. While many subplots had to be dropped to fit the movie into a reasonable running time, it felt as though they were paid lip service merely for the benefit of mentioning them.

The actors have certainly grown into the roles, and if there\'s one complaint about the characters, it\'s that we get glimpses of many truncated roles that feel somewhat wasted on screen. Emma Thompson has literally 3 lines of dialogue in the film, for instance, and is then never seen again. It was nice to see Ralph Fiennes as Voldermort, though he seemed to have just as big a role (i.e. not that big) in this film as he did in the last one! Helena Bonham Carter as Black\'s mad cousin Bellatrix Lestrange was really good, but had an incredibly short amount of screentime. Thankfully her role is enlarged in the next film. But it is, without a doubt, Staunton\'s portrayal of Umbridge that is the best part of the film. She is a character you just love to hate, and every time she was on screen was a pleasure.

Nicholas Hooper\'s score is perfectly adequate for the film, and references John Williams\' \"Hedwig\'s Theme\" a few times. He wrote a few nice themes of his own, but the climax of the film felt like the music took the easier route, with some tense strings during the Hall of Prophecies sequence that could have been more threatening and made the sequence more exciting. But overall it was a satisfactory job, and assuming that he\'ll be scoring the next film (since Yates has signed on board to direct it), I hope he builds on the foundation he set here.

Fans of the Harry Potter films and books should be pleased with Harry Potter and the Order of the Phoenix. It\'s not the strongest chapter in the saga, but it certainly works well, and while it\'s not as action packed as the trailers would like you to believe, there\'s plenty here to keep you interested and take us to the next film, due out in November 2008.