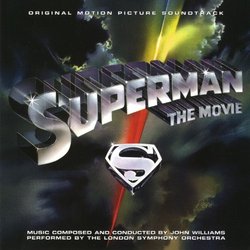 If you ever what to know how to truly release a soundtrack, you can learn from Rhino / Warner Brothers’ release of the expanded edition of the 1978 classic sci-fi/superhero pic, Superman. Folks, it just doesn’t get any better than this. For people who just like Williams, for completists, and even for the beginner, this 2 CD set has it all. From just about every different take of the "Main Title" theme, down to the source music, and variations of "Can You Read My Mind," this release finally does justice to one of the best scores John Williams produced in one of his busiest and most prolific periods (1975 —1981).

Barring an in-depth analysis of the score, track-by-track and cue-by-cue, I’d have to say that this is the penultimate when it comes to re-releasing any classic film score. Not only has the score been re-mastered and restored, but it’s presented almost in sequence (barring the alternate tracks on the ends of both CDs) and with every relevant snippet of music from the film. Heck, it has some stuff that was written, placed in the film, and then removed or re-edited, a first for any soundtrack release (okay, so some of that flurry of Star Wars scores a few years ago approached it, but I’m purposely ignoring them). The most notable, and most numerous passage is the "Main Title" theme, which, for my tastes, finally appears in its original theatrical form (although the concert arrangement appears at the end of CD 2). Up and until now, I always whistled/hummed the Superman theme with the extended opening of cellos and basses which transitioned into the more familiar low and mid-range brass prelude, and then on to the rest of the theme. I enjoyed the lead-in, which I think added the proper anticipation and excitement to the piece. When placed theatrically at the opening of the film, it is one of the most astonishing, and memorable, opening title sequences ever designed. It’s a piece of music that is instantly recognizable anywhere, and helps to really sum up the idealistic story of the film and main character, Kal-El/ Clark Kent/Superman.

The other more notable themes on the soundtrack are "The Flying Sequence", "The Love Theme" (a bit one in the same) and "March Of The Villains." The latter "march" always seems to me to be foreshadowing some of Williams’ own work in Return Of The Jedi, more specifically, "The Ewok March." It’s still enjoyable and really sets up how "lucky" Lex Luthor and his compandres are when trying to foist their evil plans upon Superman (Who really invites their adversary into their own lair and divulges exactly what they plan to do?). "The Flying Sequence" is one of the more poignant parts of the film, a place for the movie to slow down and examine the relationship between Lois and Superman/Clark Kent, overall an extremely well done piece of music (as established by itself in "The Love Theme"). I do feel sorry for John Williams at this point for being saddled into writing a "pop" arrangement of "Can You Read My Mind" for a released single. I would rank it with the disco version of the Close Encounters Of The Third Kind theme and Mecco’s "Star Wars / Cantinia Band" arrangement as being strictly available for novelty purposes. Granted when the song progresses into the more orchestral section, it comes back to pure Williams genius, without all the "pop" junk and Margot Kidder voice over (sorry Leslie).

A number of the action sequences are marked by, what have now become, trademark "Williams-isms". Usually it’s a number of pulsating tremolo strings and short rhythmic staccato-like brass figures that make their rounds up and down mid-register scales. Many of the gaps in the action are filled in by rising brass flourishes and mini-fanfares (re-introducing the "theme" here and there). On the orchestration side of things, Williams begins his use of light woodwinds (oboe, flute, and clarinet) for the quiet "heart-felt" moments which have become a staple in many of his scores after Superman. Also typical in this era of Williams’ scoring career, the end credits is usually a reprise of the main themes, such as in Star Wars, Close Encounters, and Indiana Jones, which really re-introduced a trend that hadn’t been heard since the gold-age of film scoring (1930-1955).

I truly can not lavish enough praise on this soundtrack release. Nick Redman and Michael Matessino have done a wonderful job, and Michael has provided some of the best, most down to earth liner notes you could ask for. This soundtrack has seen other releases, an incomplete release on two Warner Brothers LPs, two on single Warner Brothers CDs (the Japanese pressing having the same content as the LPs) and a re-recording done masterfully well by John Debney and The Royal Scottish National Orchestra on Varese Sarabande. I’d say swallow the $30 and get the CD set, you won’t be disappointed, in fact, I’m sure while you’re standing in the check-out line at the store, people will be eyeballing and coveting the treasure you hold in your hands.