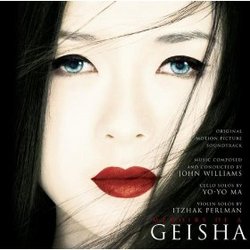 Memoirs of a Geisha

Review: Memoirs of a Geisha

John Williams has been having a very busy year. He wrote his last Star Wars score, then took on alien invaders in Steven Spielberg\'s War of the Worlds. Currently he is finishing up recording his score to Spielberg\'s drama, Munich, but somehow he also managed to find time to write a score for Rob Marshall\'s film version of the hit novel Memoirs of a Geisha. Starring a pan-Asian cast including Zhang Ziyi, Ken Watanabe and Michelle Yeoh, the film follows the story of Sayuri (Ziyi), an impoverished Japanese girl who is sold by her parents and taken to the Hanamachi.

The album beings with a concert version of "Sayuri\'s Theme", with Yo-Yo Ma providing the stirring cello solo. It\'s a simple yet effective melody - one you will hear quite a lot on the album. "Journey to the Hanamachi" is a dark cue, with percussion and Japanese flutes, that ends with a solid statement of Sayuri\'s theme. When Williams isn\'t giving us different renditions of this theme ("Becoming a Geisha", "A New Name... A New Life", "Confluence"), he\'s delivering Japanese styled underscore. "Going to School" is a playful energetic track, and "Brush on Silk" is a tense percussion-based cue that has a burst of dissonance.

A new theme - and a new soloist - appear in "The Chairman\'s Waltz", with Itzhak Perlman providing an emotionally tinged performance on the violin. The melody is full of longing and could easily stand as a distant cousin to the main theme from Schindler\'s List. The Chairman (Watanabe) gave Sayuri hope as a child, and she never forgot it - and as the film progresses, her secret love and devotion to him - as well as the times their paths cross - allows Williams to come up with a very variations on the theme, performed even at times on the brass ("The Fire Scene and the Coming of War"). This aforementioned cue also features an excerpt from the Japanese opera "Ogi No Mato (The Folding Fan as a Target)", and might seem out of place on the album, but works quite well in the film.

The album ends with "Sayuri\'s Theme and End Credits", and solid 5-minute track that encapsulates the energy, emotion, and drama within the film, projected as music. Williams has done an excellent job with Memoirs of a Geisha, delivering a score that shows that he is truly a master of the craft. I\'ve yet to hear anything from Munich, but until such time, Memoirs of a Geisha is an easy pick for one of the best scores of 2005.