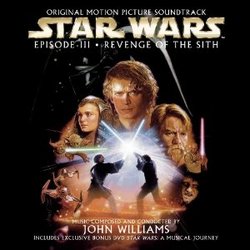 The final chapter in the Star Wars prequel trilogy is finally here. In this installment, we watch Anakin Skywalker (Hayden Christensen) take the final plunge towards the Dark Side. His motives are simple: after the way he failed (in Episode II) to save his mother, he is hell-bent on saving the life of his secret wife Padme (Natalie Portman), whom he has been having dreams about dying in childbirth. Led astray by his mentor and friend, the two-faced Supreme Chancellor Palpatine, Anakin is torn between his loyalty to Obi-Wan Kenobi (Ewan McGregor) and the Jedi Knights, and his seduction towards the Dark Side to save his wife. We all know which side he ultimately chooses, and this film is a dark and bleak film, with lots of emotion and death, underscored by John Williams's final Star Wars score.

As far as things go, the score is good - there are two main new themes: "Battle of the Heroes" is the climactic music used for the duel between Anakin and Obi-Wan, and there's a sorrowful tragic theme used to underscore the deteriorating relationships with, well, just about everybody. The album opens with the main title, "Star Wars and The Revenge of the Sith". Unlike the previous two prequel soundtracks, the music heard after the opening title crawl is actually from the opening sequence in the film. A rousing action cue with punctuated brass and tense strings plays out as we follow Obi-Wan and Anakin as they fly their fighters on a rescue mission. It's a great way to start the album, and the film.

Like most Williams albums, this soundtrack is not presented in film order, and many of the cues are heard in different pieces in the film itself. "Anakin's Dream" starts out with a soft rendition of the Love Theme from Episode II, with a flute and solo violin providing a counter melody, as Anakin and Padme reaffirm their secret love for one another. It gets darker and more dissonant when Anakin starts having his dreams of Padme's death, though. String work is slow and heavy, as things calm down.

"Grievous Speaks to Lord Sidious" has a building ostinato that is joined by chorus - and while it's a great bit of music on the album, in the film it feels a bit misplaced - it's literally just General Grievous having a small chat, and walking around a bit. The last bit of the cue covers another scene, where Anakin and Padme are speaking, and you can hear a nice transition from the Love Theme to the Sorrow Theme. "General Grievous" is a cacophonous cue providing plenty of action, and a nice follow-up to that one is "Grievous and the Droids" that has a lot of energy. Williams even uses a few of the fast descending brass hits that he used to great effect in Return of the Jedi.

One of the tracks that stands out because it's completely unlike anything else heard in a Star Wars film is "Padme's Ruminations". This ethereal track uses atmospherics and a wailing female vocal (almost like Minority Report) as the sun is setting over Coruscant. After Anakin has sent Mace Windu (Samuel L. Jackson) to arrest Palpatine, the camera cuts back and forth between Padme (who is concerned that Anakin might go to Palpatine's office), and Anakin (who is contemplating going to the office).

"Enter Lord Vader" has some weighty drama as Anakin accepts his new master, and figures out what has to be done: the Jedi must be stopped. In "Anakin's Betrayal", a choir is used to increase the emotional weight of the situation, as the Jedi are systematically killed, as well as dark chanting heard in "Anakin's Dark Deeds". Low throat singing is heard in "Palpatine's Teachings", a cue that accompanies the scene at the Opera House where Palpatine tells a nice story about Darth Plageous, and explains to Anakin that only by knowing the Dark Side of the Force, can one possibly prevent death. It's a naughty bit of manipulation there, since he knows that Anakin would do anything to save Padme. The cue is subtle and somber, with a low version of the Imperial March and the Force theme. You can definitely tell that there is some foul things afoot here, but the cue ends with a triumphant horn flourish as we cut to the Jedi Temple.

The penultimate track on the album is "Anakin vs. Obi-Wan". This track bounces between a fast-paced "Battle of the Heroes", and a bit of the Imperial March as heard in "Clash of Lightsabers" from The Empire Strikes Back. It covers the duel between Anakin and Obi-Wan, but also the duel between Palpatine and Yoda. In the film, "Duel of the Fates" from Episode I is used here as well. Yoda is overwhelmed and escapes, and Anakin (as we all know) gets a little crispy. As Anakin yells hatefully at Obi-Wan, who is feeling horribly crushed over the turn of events, "The Immolation Scene" plays out - a tragic string-heavy piece.

Padme, who was injured in a Force choke by Anakin, gives birth in "The Birth of the Twins and Padme's Destiny". Mysterious swirling strings and glockenspiel give a childlike quality to the cue, which ultimately transitions into the music heard in Episode I for Qui-Gon's funeral. This emotional music works excellently as the twins are born, and Vader is created out of machines - husband and wife achieving their destiny.

The album ends with "A New Hope and End Credits" - we hear Leia's theme for the first time in 28 years as she is delivered to Bail Organa (Jimmy Smits) and taken to Alderaan, and the Force theme returns as Luke is delivered to Owen and Beru Lars on Tatooine. The music swells to an emotional climax (ala "Binary Sunset" in the first film), and the end credits roll. For the End Credits, a long suite has been assembled containing Leia's theme, "Battle of the Heroes" and a lengthy concert version of the "Throne Room" fanfare from the first film. I suppose it ties it all in together in that way.

As a special bonus, the album comes with a second disc - a DVD! Here we have "Star Wars: A Musical Journey" - a 70-min collection of musical suites with footage and dialogue (and the occasional sound effect) edited to them. The continuity is not consistent; they use footage from all the films (not so much from Episode III) to cut together a thematic experience that is certainly entertaining. Hosted by Ian McDiarmid, who looks either bored or tired (probably due to his overacting in the film), the music is presented both as 5.1 Dolby Digital, and a straight-up PCM audio track. The 5.1 mix is great - and some of the tracks sound much better than those 2-CD releases that had come out! Hmm.... perhaps another chance to release them is in the works?

This is the last Star Wars film planned, and therefore most likely the last score that Williams will write for the series. While we didn't get the big choral battle piece that would have made "Duel of the Fates" look like a solo piece, "Battle of the Heroes" is a great piece that grows on you. Combine that with the Sorrow Theme, and the emotional level of this album is definitely up there. It's certainly the best film of the prequel trilogy, and I believe the best soundtrack of the bunch as well. Buy it from any retailer, because the Wal*Mart and Target bonus tracks are digital downloads, and they're just an interview with Williams, and a radio mix of the "Battle of the Heroes" with dialogue and sound-effects. You wouldn't be missing any score.