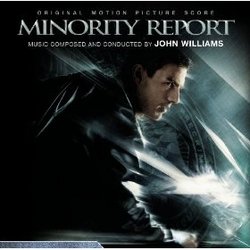 It must be the heat.

Every year, as the spring grass loses its luster and fades to a drab, uniform green, movies at the multiplex lose their wit, effervescence, and style and become a uniform series of special effects blandness that impress as quickly as they fade.  Like slothful cattle forced to gnaw on stringy, late-summer grass, we moviegoers line up to feed on the latest Hollywood product while basking in air conditioned comfort for two hours.  "I don't want to think during the summers" is a mantra I've heard issuing from my mouth as well as those of my friends all too often.  Too hot to move, too hot to think, and too hot to complain about the slop we are being fed.

Then, along comes an intelligent, suspenseful thriller that fits into that summer mold we have all been conditioned to accept but nevertheless tweaks the genre and delivers something new and, dare I say it, refreshing.  Minority Report is just such a movie.

Minority Report is a basic whodunit film noir set one hundred years after the genre was first named.  John Anderton (Tom Cruise), a top cop in the Department of Pre-Crime in Washington D.C. in 2054 has a slight problem.  You see, the pre-cogs, a trio of children who have the ability of predicting a murder minutes to days before it happens, have fingered Anderton as one of the few men to commit premeditated murder in recent years.  The only catch is that Anderton has never met the man he is supposed to kill.  The rest of the movie details our hero's attempts to uncover if he was set up, who set him up, and why.

Of course, a five sentence explanation of the movie does not begin to do it justice.  How in such a short time can I mention the knife's edge it walks between predestination and free will, the Omelas-like moral conundrum constructed where the welfare of a civilization rests on the exploitation of innocent children, or the amazing metaphors of sight and vision that resonate throughout?  I cannot, so you have to content yourself with my words on the score.

I have to begin by saying that I am not a huge John Williams fan.  There, I said it and you can all pick your jaws off the ground; I'll wait.  Are you back?  Good.  Now, I love his scores for Star Wars and Schindler's List and applaud his use of leitmotif and thematic development.  I recognize the amazing service he has provided by increasing the level of recognition film scores enjoy.  I hear his workmanship and appreciate how well his music meshes with the movies they accompany.  I just think he tends to overuse themes until they lose their associative power and often his music leaves me cold.  That being said, I enjoyed his music for Minority Report.

Why is it that in almost every movie set in the future, the music sounds as though it were written in the 1950s and 1960s?  Futuristic settings seem to conjure for composers the feeling that music would be sleek, dissonant, angular, and exactly like art music from forty years ago.  It is the musical equivalent of everyone wearing similar shiny suits in old sci-fi movies.  Williams' score buys into this cliché as much as the movie buys into film noir ones, but is able to alter expectations enough to keep things interesting.

There are very few traditionally melodic themes in this score.  Instead, Williams employs small rhythmic motifs that are then developed almost as thematic cells.  These cells are repeated and juxtaposed against other cells that are strikingly dissimilar and slowly moved up in register and timbre generating tension while not drawing attention to themselves.  This technique is fully evident on track 8, "Everybody Runs!" one of the few tracks on the CD that immediately grab a listener's attention.

This technique is reminiscent of Bernard Herrmann's scores for Hitchcock's thrillers such as North by Northwest.  As you will recall, the opening theme of that score is a perpetual motion motif in duple pushed up against a descending line of triplets.  The combination of the two repeated over and over at different pitches generates the movie's tension, especially in the climactic scene on Mt. Rushmore.  Listen to Minority Report with this in mind and I believe the score begins to open up and make the connections Williams wanted the audience to make.  This almost homage to Herrmann is hardly an accident, as in the liner notes for the score Steven Spielberg wrote that, "John Williams and I have often marveled at the way Bernard Herrmann was able to contribute so much musical suspense to an Alfred Hitchcock picture."

The only theme instantly recognizable as one by Williams is Sean's theme.  This is a gently lilting theme representing Anderton's lost son and is originally introduced in track 4, "Sean and Lara" as a piano solo.  In one of the most remarkable instances of scoring perfectly matching onscreen action, in track 14, "'Sean' by Agatha," the theme is treated to a series of different frames.  As Agatha describes Sean's life, the theme moves through various instrumental combinations and rhythmic pulses, commenting on and expounding upon this imagined life.  It is a remarkable bit of scoring.  The theme makes its final appearance in a fully-orchestrated, typically Williams-esque manner in the final track ("A New Beginning") as Anderton embraces the future.

One of the more delightful aspects of this score is Williams' use of new instrumental timbres and source music.  As Anderton listens to classical music throughout the film, in several sections that music makes its way into the score.  Bits from Schubert's "Unfinished" Symphony and Tchaikovsky's "Pathétique" Symphony are added into the mix.  Similarly Williams uses the electronic instruments that were so prevalent in the middle section of A.I., a disconcerting female vocalist used to capture the otherworldliness of the pre-cogs' visions, and the Oriental drumming that Tan Dun used to such great effect in Crouching Tiger, Hidden Dragon.  It is this constantly expanding tonal palatte that makes film scoring so interesting and rewarding and I am glad to see Williams, who often uses only orchestra to score, embracing these new sound worlds.

So there you have it.  A recommendation of a John Williams score from one who is inclined to dismiss the hype surrounding every note that falls from his pen.  What can I say?  It must be the heat.