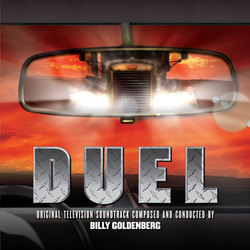 Composer Billy Goldenberg was given scoring duties to bring this rust-colored score to life, ultimately ranking as one of the most abstract and experimental works in the composer's output. Less a presentation of themes than it is a collection of unnerving effects and moods, Goldenberg's music gets inside the addled brain of David Mann (Weaver) producing a portrait of terror and disintegrating rationality as Mann struggles to fight back against his implacable, anonymous foe.

Goldenberg scored for a group of 39 players, limited to strings, harp, keyboards, guitars and percussion, with no brass or woodwinds. Veteran percussionist Emil Richards provided a number of exotic instruments from his vast collection amassed from around the world, and Goldenberg hired Paul Beaver to supply effects with a Moog synthesizer.

The scoring sessions were also innovative for the day, incorporating a then unheard-of-for-television process of recording onto three separate channels (the typical recording format for Universal during that era), then making takes with other instruments on three channels in sessions of their own for overlaying one on top of the other, sometimes gaining up to twelve recordable channels long before such multi-channel recording processes were commonly in use. In spite of everything ultimately being mixed down to mono for the film's presentation, Universal retained every multiple three-channel recording session layer on separate rolls of 1/2" tape. This allowed us to create true stereo takes of nearly every cue, with only the diner source cues in mono. Listeners will thus be hearing some of the most complex television scoring of all time with stunning stereo detail that reveals numerous innovative techniques vividly on display for the first time.