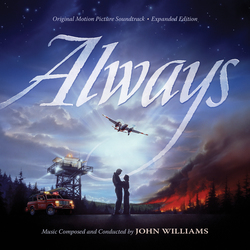 La-La Land Records, Universal Pictures, Amblin Entertainment and Geffen proudly present a Limited Edition remastered and expanded CD reissue of John Williams' original score to the 1989 feature film Always, directed by Steven Spielberg and starring Richard Dreyfuss, Holly Hunter and John Goodman. Williams' sumptuous orchestral score gives this touching story of timeless love and miracles an irresistible dreamlike quality—lifting and carrying the film, and its audience, on a musical wind that soars them into a timeless, romantically blissful realm. Maestro Williams also raises the stakes of the film's riveting firefighting sequences with the kind of expert dramatic action cues that are his trademark.

Produced and mastered from studio vault elements by Mike Matessino, and approved by the composer and the director, this expanded CD is limited to 3500 Units and includes never-before-released material and exclusive, in depth liner notes also written by Matessino. The soaring art design is by Jim Titus.