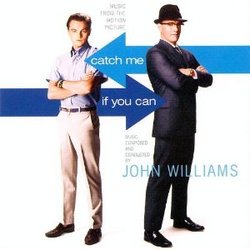 Catch Me If You Can

Review: Catch Me If You Can

Who would have ever thought that in a two year period we would end up with three Steven Spielberg films, and three great John Williams scores for each of them?  After A.I.: Artificial Intelligence came Minority Report - both films showcasing different dark futures.  But now comes Catch Me If You Can, a film that takes place in the past - and is based on true events.  Frank Abagnale, Jr. was an excellent con-man and had a check-forging scheme that ran into the millions of dollars - all before he was 18-years old.  He posed as an airline pilot, a doctor, and a lawyer, before finally being caught by the FBI.  His novel was the inspiration for the film, and with the story taking place in the 60s, it wasn't surprising that composer John Williams would harken back to that time and grace us with a delightful score that not only recalls his past works, but also is injected with plenty of drama and emotion.

The opening cue, "Catch Me If You Can" contains a sneaky melody, underscoring a rather retro and fun animated title sequence.  As the melody builds, the seemingly rambling jazzy style builds to a crescendo, and some darker string elements are brought in, reminding me of parts of Jurassic Park.  There are a few major themes in the score, one of them first heard in "The "Float"", a rather upbeat celebratory melody.  "Recollections" comprises The Father's Theme, a rather touching cue that evokes a darker Sabrina - and even touches of Angela's Ashes.  This theme is heard numerous times throughout the score, in various forms.  A more somber, quiet rendition is heard in "Father and Son", one of the more emotional cues on the album.

Between the light celebratory cues, the emotional cues, and the fun jazzier material, we also get a few songs that show up in the film.  Frank Sinatra's "Come Fly With Me", Nat King Cole's "The Christmas Song", Judy Garland's "Embracable You" and even "The Look of Love" and "The Girl from Ipanema" all fit into the storyline well, but break up the album - it might have been nicer to put them clumped at the end, so we could enjoy Williams' score uninterrupted.

This album is one that I enjoyed when first listening to it, but I didn't have as good an appreciation for it until I saw the film - context is very important in this case.  While I still am leaning towards Minority Report as Williams' best score this year, I'm still very please with Catch Me If You Can and have no reservations recommending it to even the most casual of film score enthusiasts.