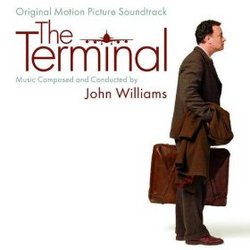 For their latest collaboration, Steven Spielberg and John Williams explore the darker side of bureaucracy, but without entering a Gilliam-esque nightmare. The Terminal is about Viktor Navorski (Tom Hanks), a Krakozhian who finds himself stuck in the airport when a military coup overthrows the government at home, and his entry visa to the United States is revoked. He can't enter the country, but he can't go back either. He spends the next six months in the airport terminal, dealing with a scheming airport security administrator Dixon (Stanley Tucci) and establishing relationships with the various workers in the terminal. While you might think that romance is in the air, the setup between Viktor and airline stewardess Amelia (Catherine Zeta-Jones) is ultimately a red herring that goes nowhere and even turns you off to her character. To make matters worse, the big emotional climax of the film involves a crucial element not even introduced into the film until the last 20-minutes. As such, it's one of the larger disappointments of a film I've seen in a long time. Not as disappointing though is John Williams' touching and lighthearted score.

Viktor's whimsical theme is heard on a clarinet in "The Tale of Viktor Navorski". The ethnic melody quite aptly evokes feelings of a former Soviet-bloc republic. As with most Williams themes, this track is a concert version (never heard in this manner in the film), but it builds up quite nicely and lends itself to a pleasing listen.

Not in film order, with "Dinner with Amelia" we're quickly thrust into a pseudo-romantic dinner scene between Viktor and Amelia, where he tries to learn more about her - as his fellow terminal friends do their best to make the meal go as smoothly as possible through presentation and entertainment. Of course, the comedy in the scene comes more from what Gupta (Kumar Pallana) is doing in the background, combined with the music. The track, accentuated with accordion and piano, maintains a lively upbeat tone for the first half, before segueing into a more serious and heartfelt version.

Williams builds upon the Navorski theme in "A Legend is Born" and "Refusing to Escape", two very different cues - one upbeat and wondrous; the other slightly ominous and expressing hesitation. This theme is also visited in a very amusing sequence underscored by "Finding Coins and Learning to Read" where Viktor discovers how to make money through the cart return system. Charming romanticism in the light-and-airy Sabrina style shows up in "The Fountain Scene", with the "home theme" making a full statement, and celebratory flirtatiousness abounds in "The Wedding of Officer Flores".

Good old-fashioned fanfare writing is used quite liberally in "Krakozhia National Anthem and Homesickness", and "Jazz Photographs" starts out with a source-like free-form jazz cue that segues into a softer rendition of the love theme. "Gupta's Deliverance" brings us another rendition of the "home theme", as well as the last two cues (""Destiny"... "Canneloni"... And The Tale Of Viktor Navorski Reprise" and "A Happy Navorski Ending!") which allows us to conclude the musical journey in full circle with all of the major themes coming back into play.

It's a solid album to listen to, full of easy listening and no downer moments. Running nearly an hour long, it's certainly shorter than the film, and nowhere near as disappointing. With Harry Potter and the Prisoner of Azkaban already established as one of the best scores of the year, and now with The Terminal added to the pile, Williams is sure to make an appearance at the award shows next winter.