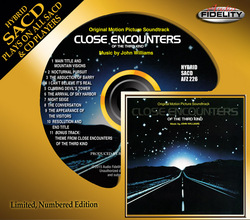 Close Encounters of the Third Kind is visionary director Steven Spielberg's now classic exhilarating 1977 science fiction film. The masterful score was composed, conducted and produced by John Williams. The soundtrack is a mixture of eerie suspense and tremendous emotive bombast, complete with hair-raising moments and the great big playful musical conversation between the mothership and the humans. Williams' "five-tone" motif for the film has become ingrained in popular culture (the five tones are used by scientists to communicate with the visiting spaceship as a mathematical language as well as being incorporated into the film's signature theme).

The album was a critical and commercial success, peaking at #17 on the US Billboard album chart and reaching #40 in the UK. John Williams won two Grammy Awards for his score (Best Original Film Score and Best Instrumental Composition). A disco version of the five-note motif, though not part of the original score, is included on the disc as a bonus track making this CD an essential acquisition for collectors and movie and music fans.