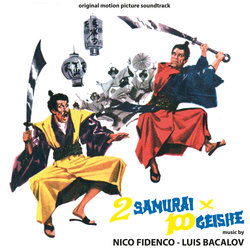 This unprecedented OST was written by Nico Fidenco and Luis Bacalov. In 2010, a 6:46 minute long suite was released by GDM Music in the box set "Nico Fidenco My first fifty years." Previously RCA had released a single containing the songs "The Two Samurai" ("I due samurai") and "Judo twist." Fidenco and Bacalov wrote a lively main dance score sung by a choir (Tr.1) which is reprised in an alternative version of the single (Tr.14) and changed in Tr.2. Despite the humor in the film, the OST is very orchestral and dramatic as it develops, with a recurring oriental feel (Tr.3, Tr.4). The authors put together a mystical holy melody (Tr.6) which is contrasted with many battle motifs (Tr.5, Tr.9, Tr.11, Tr.12). Franco & Ciccio sing a short piece in a funny Sicilian-Chinese language (Tr.13). The music closes with the "Judo twist" from the fabulous American style orchestra (Tr.15). We used the mono master tapes from the original recording session which allowed us to publish 40:51 minutes of music.