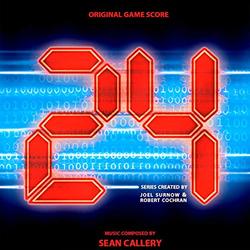 In my review for Callery\'s "24" album from Varese Sarabande, I commented that fans would be looking forward to music releases from Season 4, or additional music from the first three "days" that were omitted from the first compilation CD. That is still yet to come, but fans of "24" will be interested in the new digitally-released score to "24: The Game" with new music by Callery. The 22-minute score does not cost as much as a full priced album, but is available only as a digital download from www.foxmusic.com for $6.99. There is more music used in the game than appears on this album, but a large amount of it came from music already written for the show.

Musically, the eight tracks on this release are similar to Callery\'s Emmy-award winning score for the show. There are two major differences here that make this a "sure buy" for fans of the Varese Sarabande album. First, Callery recorded this with an orchestra in London except for some of the percussion; the show is mostly synthesized. The game score was orchestrated by William Ross (Harry Potter and the Chamber of Secrets). Second, Callery took the opportunity to write a symphonic suite of his theme for "24". This five-minute track opens the album with the best version of the theme for the show we\'ve ever heard. It is played by real brass, and Callery is able to extend the development of the suite without the time constraints of the show. This bold brass theme returns in "CTU Takeover".

While the style of the music is similar to the show\'s score, the use of the orchestra gives it extra depth. "Storming the Cargo Ship" showcases this with some layered string and brass elements. I have always thought Callery\'s theme was reminiscent of Bill Brown\'s theme for Tom Clancy\'s Rainbow Six games, but this is completely appropriate and, like Rainbow Six, it gives the show (and now the game) a bold militaristic feel. For some, the "24 Symphonic Suite" will be worth the price of the whole download, but there are some good cues in the rest as well. It would be nice to see the show\'s score make a move to more orchestral elements as well.