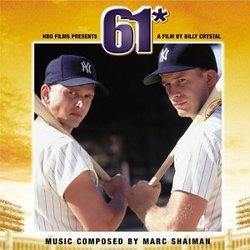 The HBO baseball biopic 61* details the friendly rivalry that developed between the ostentatious, much-adored Mickey Mantle (Thomas Jane) and laconic underdog Roger Maris (Barry Pepper) as they simultaneously raced to break Babe Ruth's longstanding home run record. When director Billy Crystal needed a composer for this nostalgic glance back into Kennedy-era America, he looked no further than longtime friend and frequent collaborator Marc Shaiman (Mr. Saturday Night, My Giant). As a composer, Shaiman is more than up to the task at hand, represented here on a score-only CD from Jellybean Recordings (there is a songs-only CD as well, reviewed here – more on that later). And while this isn't anything we haven't heard before, it doesn't really have to be. It's lyrical, funny, and ultimately moving. Sometimes that's enough for me.

The disc opens with "Opening Trumpet", a quick brass solo heralding things to come. (Incidentally, the lone trumpet pops up again later in a spare reading of "Take Me Out To The Ballgame".) From there, Shaiman is quick to familiarize us with his lovely main theme in the restrained flute-driven form of "Scrapbook". It's a great theme in the throwback vein of scores like Williams' JFK>, and Shaiman will ultimately get a lot of mileage out of it. For the time being, though, the score alternates between the triumphant ("Flashback" is a great example, with Forrest Gump-like brass work) and the melodramatic Americana vibe of cues such as "Hair & Hip" and "Every Pitch Could Be The One", of which James Horner would no-doubt be very proud. Or jealous. Or maybe just taking detailed notes. (Sorry, I digress.)

Of course, Shaiman is still the guy who co-wrote the staggeringly awesome South Park score, and his fun side shows in a trio of consecutive cues starting with "Mickey's Drunk" and ending with "The Fat F**k". In this stretch, he combines a funky upright bass shuffle with piano, drums, and a dippy whistling voice. It's quite catchy, as is the bouncy "On The Bust". And lest he ever take himself too seriously (never a danger with Shaiman), he even begins one cue "Roger Wants 61" with a Percy-Faith style arrangement of the song "This Is Dedicated To The One I Love".

The second half of the score gets some real steam going with cues like the rallying "Knuckleball". His main theme begins peeking out more frequently and with more ennobling urgency in cues like "Roger Wants 61" and the soaring album highlight "Holy Cow". Fans of The Natural should take note, if you haven't already.

Clocking in at just under thirty-five minutes, many of Shaiman's twenty-three cues here are obviously on the short side. But you shouldn't let that, or the brief overall running time, scare you off. Even with these apparent handicaps, there is an admirable amount of thematic development going on here. This, along with the warm colors of Shaiman's trademark string writing, sets 61* apart from your typical made for TV movie. So don't let the HBO logo fool you: this is big, well recorded, theatrical-scale stuff.

In fact, practically the only flaw I could find here has nothing to do with Shaiman's contributions. Rather, it is a big issue with 61*'s companion album of songs from the film. Not only does that disc clock in a truly embarrassing running time of 22 minutes, it also contains two Shaiman-arranged grandstand-style organ tracks that really belong on this disc. Tsk, tsk, Jellybean Records. Trying (and no doubt succeeding) to con Shaiman fans into buying both albums when in actuality, all of the material from BOTH albums would have made a fabulous single disc running just under an hour. Hey, I know licensing and reuse fees are tough beasts to contend with when releasing any album, but this two-disc full price / half the material garbage shows nothing but contempt for consumers and collectors alike.

But that's not Marc Shaiman's fault, of course, and his fine craftsmanship alone is still worth checking out this release.