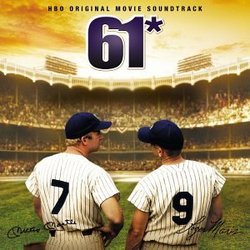 In the Billy Crystal directed cable movie 61*, the 1961 home run race between Mickey Mantle and Roger Maris is played out for our entertainment.  As expected, the soundtrack for the film would bounce between Marc Shaiman's dramatic score, and songs from the time period.  This particular album contains only the songs from the film, with a few organ cues arranged and performed by Shaiman.

"Put on a Happy Face" and "Heart (U Gotta Have)" are the two Shaiman cues.  They're basically source cues heard during the baseball games.  They're short and nothing spectacular - but they certainly do set the mood.  "Dedicated to the One I Love" by The Shirelles, "I Count The Tears" by The Drifters, "Talk To Me Lonesome Heart" by George Jones, and "Hello Mary Lou (Goodbye Heart)" by Ricky Nelson comprise a nice selection of oldies that fit well into the film, and do a fine job placing the film smack dab in 1961.

Also included on the album are a few baseball themed tunes.  "I Love Mickey" by Teresa Brewer is a great little nostalgic number all about Mickey Mantle; "Cooperstown" and "Talkin' Baseball (Willie, Mickey & "The Duke")", both sung by Terry Cashman, are wonderful examples of baseball songs - they really don't write them like this anymore, unless you consider "I Wanna Be Like Mike"…. Nah.  As one would expect, the album ends with a rendition of "Take Me Out To The Ballgame" - but this time in pure Latin big-band style, as performed by Arturo Sandoval.  It's a nice way to cap of a rather upbeat and well compiled album.

But this album has one glaring fault, which knocked its rating down to 2-stars from 3-stars.  It's only 22-minutes long. For at full-price, you're not getting much of a deal by buying this album - it's a little under $1/minute!!  The companion score album runs a little over 30-minutes - so why didn't they just merge the two albums into one and save everyone the hassle of getting two soundtracks for one film?  It's a question that puzzles me, and leaves me with a bad taste in my mouth.  If it weren't for the incredibly short running time, I would have said that getting this album would be a good call.  But now, it looks like you might have struck out.