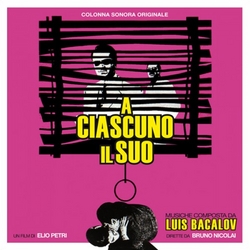 Remastered and slightly expanded re-issue of two classic scores by Luis Bacalov, presented together for the first time.

Elio Petri's A ciascuno il suo marked the only collaboration between Petri and Bacalov, who provided a varied and thematically consistent underscore that rangers from a rush romantic melody for Sicily and Laurana to harsh jazz rhythms for the criminal activities. The program also includes four different versions of the memorable Samba tune that was used in the film's expertly shot finale.

In La polizia e al servizio del cittadino? (1974), Bacalov's bustling big city music matches the gritty urban tone of the film with a memorable main theme that lends an almost poetic quality to the violent events. Other themes include a lonesome melody for the policeman whose private life had been ruined by his immersion in crime, plus great action and suspense set pieces following the unorthodox investigation of Inspector Seroni.

These scores had been previously issued by Point Records on separate discs. This new release offers both works in complete form with a better organization of the tracks and estimated chronological order which we only modified to make the disc a better listening experience. The single version of Bacalov's "Samba" from A ciascuno il suo makes its CD debut here.