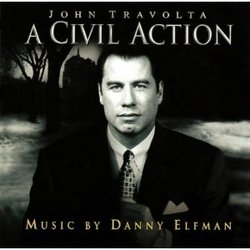 In A Civil Action, Danny Elfman continues his latest musical trend that I first noticed in To Die For—very contemporary, rhythmic, and yes, "smooth." With a unique approach to percussion, synthesizers, choral work, and a traditional orchestra, the direction that Elfman has gone in the past few years is strikingly different from his previous films, which had a more traditional (yet quirky) orchestral approach (such as Batman, Edward Scissorhands, and Beetlejuice).

It is very difficult to put into words how the score to A Civil Action works. It reminds me of those "moving art" displays in airports in which small metal balls go through a strange obstacle course, setting off chimes and other instruments as they progress along. What you hear ends up being a very rhythmic, amorphous sequence—which is how this score sounds. Except, of course, this score has a theme and a chorus, which random metal balls couldn't produce. But that isn't all there is to the score. There are the soft emotional moments that are represented by segments that are almost exclusively comprised of strings. Track 9 ("Trial") provides an excellent example of the soft emotional tension provided by the strings, with the help of a piano.

Parts of the score remind me of a strange amalgam of To Die For, Mars Attacks!, and Dolores Claiborne (which I think is one of Elfman's best dramatic scores). Other parts (the more action-laden parts, of which there are very few) utilize the now-familiar dissonance that Elfman first introduced (I believe) in Mission: Impossible. Soft choral work combined with what sounds like wineglasses creates a very moving cue ("Why?"). Elfman had said in a recent interview that he used a lot of glass in this score, and upon further reflection, I realize that much of what I thought were synthesized elements actually were glass being played (much as one would do at a dinner party, but on a professional level).

One of the main themes in the film sounded very familiar to me, and it turns out that I was reminded of the song "Tender Shepherd" from the original Peter Pan musical. I have no doubt in my mind that this was purely coincidence, but I thought I should point it out, in case anyone reading this was thinking the same thing. The last track of the CD is the "End Credit Suite," which nicely encapsulates all of the major themes presented in the film into a six-minute suite. To be honest, listening to that "suite" is more satisfying than listening to much of the CD, but only because it provides that "instant satisfaction" that people like myself have, which is the terrible habit of jumping around to different tracks on a CD just to hear specific themes. But that isn't to say that the CD is not worth getting! On the contrary, I think that this is definitely a score worth getting, if anything just for the "Why?" cue.

Ultimately, A Civil Action is not the best score that Danny Elfman composed for the winter of 1998—that honor goes to A Simple Plan. But the score is certainly interesting to listen to, and while I personally yearn for a return to his dark orchestral style for the upcoming Sleepy Hollow, Elfman's current style of scoring is one that I can live with for now.