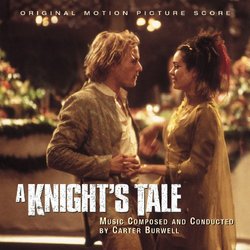 When the soundtrack to A Knight's Tale was release, many fans were disappointed that only one score cue was included - and covered with dialogue!  But now Carter Burwell fans can rejoice - for his score to A Knight's Tale has finally been released!

For the film, director Brian Helgeland broke down a few barriers and allowed some classic rock songs (primarily from the 1970s) to be included in the film - not just source music, but actually existing in 14th Century France.  Burwell's score reflects this ideology, and contains a rather eclectic, yet consistent, mix of old village styled source music combined with hard rock guitars - but all with the classic Burwell touch.

"Nemesis" starts off quiet and dramatic, but soon erupts into a brass fanfare which sounds like it could very well be an alternate theme for Monday Night Football!  That is followed by a bit of dark brass, and pounding percussion.  As this is more or less a period piece, a bit of classic guitar and flute work is always required - but in "Cooked Patents", an electric guitar and rock drumbeat joins the fray, along with the occasional eruption of brass.  It's this contemporary mix of rock and "period" scoring is joined by choir in "A New Worship".

Some tender moments do exist in this score, primarily heard in "Apprenticed", "Guinevere Comes to Lancelot" and "To Run or Not To Run", the latter of which ends with a rather royal fanfare in the classic Burwell minor chord sequencing. A choral bit in "Mondo Niger" is followed by dark electric guitars in "Dark Watch".  "Cheapside Promenade" and "Love Reflects" contain fiddles that have the same high-timber sound as heard in Fargo.  The climax of the film is underscored, of course, by "The Showdown".  Here Burwell brings all of the elements heard thus far into one cue.  We have the large fanfare, the choir, the rock guitar, the soft and tender moment, and of course the triumphant elating reprise of the main theme when the hero wins.  (I'm not ruining anything to say that he wins - come on, people!)

There is a sequence in the film during which the two leads dance to a period tune, which slowly segues into David Bowie's "Golden Years".  It's a great sequence in the film, and I'm positive that the orchestral part is heard in "St. Vitus' Dance (Smithy Mix)".  Here Burwell provides us with a complete number, including a great bass line that is (once again) pure Burwell.  At the end of the album, a "Grog Mix" of the song is included.  This one isn't in the film, and it's a bit more hard-edged rock (with electric guitar solos) than the other version.  It is capped off with a bit of dialogue from the film that is quite amusing.

It's nice to hear a Burwell score that has such variety in the styles of musical presentation, and with a few strong themes and a decent running length, this is an album that is sure to please most Burwell fans.  It's not a "must have" album, but considering the effort they went through to release the score, the least you could do is take a listen.