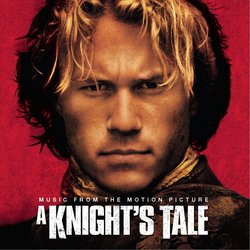 I have to admit, that it was a rather interesting idea.  Brian Helgeland wrote (and directed) a rather straightforward story about a young squire, William Thatcher (Heath Ledger) who poses as a knight to win jousting competitions across the land.  At the same time, he competes with the "evil" Count Adhemar (Rufus Sewell) for the affections of the Princess Jocelyn (Shannyn Sossamon).  What made A Knight's Tale a bit different from any other film with the same stock storyline is that Helgeland chose to mix modern rock songs into the film.  Just slapping them on top of the music track wasn't enough - these modern songs actually exist in the universe that is A Knight's Tale.  The film sported a rather medieval score by Carter Burwell, but the soundtrack focuses almost exclusively on the songs instead.

The opening title sequence begins (appropriately enough) at a jousting tournament.  The impatient crown is (literally) singing Queen's "We Will Rock You".  It's funny, because you have no idea what this film is trying to do.  The obligatory training montage is covered by War's "Low Rider", repairs are done to "Takin' Care of Business", and a medieval dance number progressively gets hipper until they're dancing (modernly) to David Bowie's "Golden Years".

Other songs used for effect (typically humor that somehow manages to seem appropriate after a while) include Eric Clapton's "Further On Up The Road", Rare Earth's rendition of "Get Ready", Sly & The Family Stone's "I Want To Take You Higher" and (for the climactic return to London at the end of the film) Thin Lizzy's "The Boys Are Back In Town".  A "rousing" speech by Geoffrey Chaucer (Paul Bettany) to the crowd is included, backed by Burwell's equally "rousing" underscore in "One Of Your Own".  It's a nice little cue, but more score would have been nice.  It's no surprise to say that Thatcher wins, and the film ends with Robbie Williams + Queen's "We Are The Champions".

For extra measure, a few songs not in the film are tossed on the soundtrack as an extra "bonus".  I would have honestly preferred score, but what can you do?  One major flaw of A Knight's Tale was that it really didn't go full bore with the modern jokes and devices.  So in the end, we had a rather straightforward medieval jousting movie, with some modern songs tossed in.  For a truly full-bore experience, I would have to recommend Moulin Rouge.  But A Knight's Tale isn't a bad compilation album, and if you liked the songs in the film (and don't already have them from other sources), you'll probably want to pick this one up.