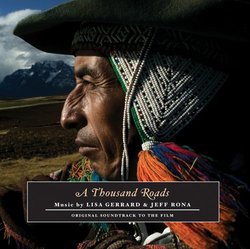 Jeff Rona demonstrated his ability to compose for vocals and ethnic instruments for the Sci Fi Channel\'s mini-series, Earthsea. His latest effort for the short film for the Smithsonian National Museum of the Native American, A Thousand Roads, builds upon some of his past work and adds a new element, that of Native American vocals, performed for this album by the vocalist group Ulali. I was very impressed with his work for Earthsea and looked forward to this score. A Thousand Roads shares many elements with the fantasy mini-series, but with a smaller orchestral and thematic presence; in place of these are Native American vocals as well as performances by co-composer Lisa Gerrard. Rona and Gerrard met while working on Hans Zimmer\'s Gladiator in 2000. The producers of A Thousand Roads liked her work on Whale Rider and had Rona compose the score with her.

Rona\'s orchestrations are generally low-key in order to make room for the strong vocal performances featured on the album. "Good Morning Indian Country" opens the score with a low flute and strings that provide the backdrop for Gerrard\'s voice. "Rowing Warriors" changes the tone to pounding drums and male chants and "Canyons of Manhattan" takes on an electronic feel for the modern world, while keeping the vocal and flute sounds. Gerrard\'s voice is beautiful and ethereal as ever and, for those of you wondering, this does not sound like Gladiator, as some of her recent contributions to film music have been said to. Her performance stretches her vocal range nicely.

Rona\'s best contributions are "Coming to Barrow" and "Who Are We To Say", but the best track, which features both Rona and Gerrard is "A Thousand Roads", a nice combination of all the elements of the score, including the flute, percussion, and Native American voices. The album contains six tracks at the end of Native music and vocals without Rona or Gerrard. The short film is 40 minutes and the album runs nearly an hour; the difference being these included source cues. A Thousand Roads is not thematic like Earthsea, but it is a strong world music album and it is good to hear Rona and Gerrard\'s first collaboration since 2000.