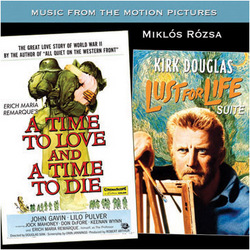 A winning pair of the late fifties from the great Hungarian-born maestro who became a legendary figure in Hollywood.

Although a more intimate work than the historical epics with which Miklos Rozsa's name is usually associated with, the score for Douglas Sirk's A Time to Love and a Time to Die features the composer's usual rich orchestral palette and powerful bursts of dramatic tension with the support of a large brass section. Romance takes also an important place in this story of a German soldier (John Gavin) dealing with the consequences of the Second World War.

The Decca soundtrack album of A Time to Love and a Time to Die, performed by the Universal-International Orchestra, was reissued by Varčse Sarabande in 1978, then on CD in 1993 by MCA Japan, which is a long time out of print.

We complete the program with the 22-minute stereophonic recording of the Lust for Life Suite, performed by the Frankenland State Symphony Orchestra in Germany. The composer gathered here the main themes from his 1956 score for Vincente Minnelli's drama based on the life of artist Vincent van Gogh, starring Kirk Douglas. This suite, close to the original soundtrack but intended for the concert hall, was first released on a Decca LP in 1958, along with other concert adaptations of Rózsa film scores (Brute Force, The Killers, The Naked City). Varčse Sarabande would reissue this program 20 years later, and then re-release it on compact disc in 1993

We believe that our release of the A Time to Love and a Time to Die / Lust for Life Suite, produced from mint vinyl sources using state-of-the-art technology, is a better rendition of the original analog recordings and offers a more enjoyable listen than the compact discs previously available. 12-page full color booklet.