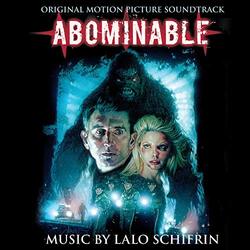 Lalo Schifrin\'s name may not front and center on many major theatrical releases, but when his son Ryan completed his first film, a horror genre offering called Abominable, his memorable musical style would be there to add a high level of pedigree. And to boot, this orchestral and electronic combo score has been presented on Schifrin\'s own label, Aleph, with the Czech National Symphony Orchestra conducted by him. Ruy Folguera is credited with crafting the electronic aspect of the score.

The album opens with "Pre-Title Sequence", a brief track of woodland noises, wolf calls and synth wooshes before leading into the quietly ominous "Main Title", which has a steady percussive beat and bubbling ostinatos running through strings and winds. In "Animal Mutilations", eerie, high range strings pace nervously above cellos and in "Preston\'s Memories", we do get a sense of a recurring motif in a lonely horn stating a short, descending line, then repeated throughout the orchestra a plaintive setting. Thus far, one can note in the distinctive Schifrin style in orchestration, instrumentation and the interplay of the various sections. There are moments, such as a section in "Preston\'s Memories" for tremolo strings beneath tender harp and piano, which sound as if this was from a film made in the 1970\'s.

Suspense dominates this half of the score, as in "Abduction" and "There Is Something Out There" through tinkling piano and rising horn and woodwind lines. "Monster Vision" begins with an interesting, quixotic pizzicato strings and a piping piccolo combo, soon adding an almost jazzy plucked bass line and repeating piano figure. Brooding, Herrmann-esque bassoons balance the piano at the start of "Preston and Amanda", before the tone relaxes into some smooth horn and string textures. Tense, atmospheric synth textures dominate "The Cave", while in "Squatch Revealed" a busy string ostinato sets the pace and carries the cue into a strident action passage for timpani and brass.

"Rampage" charges forth with heavy percussion, low brass and swirling strings. "Setting The Trap" features an insistent low end piano figure against horns, accompanied soon by fluttery flutes, pizzicato strings and muted trumpets. The excitement builds up again in "Rappelling" through a sturdy, masculine mix of a choppy low string ostinato grounding bellicose horns and timpani, a winning track. The action continues, first in "Escape Attempt" in lighter textures of primarily strings and winds before the brass return again for support, while "Off-Road Rage / Final Battle" churns like a raging storm, closing with a brief horn statement of the descending motif.

The aforementioned motif receives further variation in "The Survivors", similar to the quiet, reflective setting of the earlier Preston\'s Memories". "Searching the Woods" revisits some of the ominous tones of low winds and strings before it climaxes with a brief dissonant brassy, percussive outburst. The following tracks feature a vocal, "One Blade Of Grass", a quaint old standard sung by Pat Windsor Mitchell, and some lively bonuses. The first is "Girls Next Door", a sprightly cue vastly different from the rest of the score, featuring bright, active piano and clarinet against pizzicato strings. "Otis Leaves" climbs to a dramatic flourish while the alternate version of "Rampage" has a decreased presence of the heavy percussion but retains the frenzied, flurry of action aspect and provides a winning finish for the album.

It is a wonderful treat to hear a fresh, active Schifrin score which is not for a comedy, where he can explore dissonance, suspense and churning action dynamics. While the first half of the album features some intriguing instrumentation, atmosphere, "old school" style and hooks, it is in its latter half that the listening experience turns more engaging, due to the excitement and rapid pace displayed in "Rampage", "Rappelling" and "Escape Attempt". Certainly worth a spin!