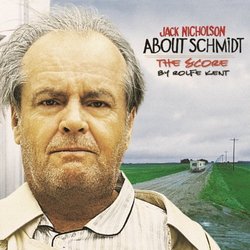 On their third collaboration, Rolfe Kent and Alexander Payne once again bring us a tale based in reality, touched lightly with comedy, fantasy, and drama. About Schmidt is one of those films that are hard to categorize. I often hear the word "bittersweet" to describe it, which is probably the best word to use. And, in keeping with the comedic, melodic scores found in the previous Kent/Payne collaborations, Citizen Ruth and Election, About Schmidt is Alexander Payne and Rolfe Kent at their finest.

I must admit that I've only just discovered Rolfe Kent. Thank heavens I did when I did, because he is fast becoming one of my favorite film score composers. Oh sure, I've heard his scores in Election and Nurse Betty, but I've never closely listened to one of his scores. After viewing About Schmidt, however, the only thing on my mind was to purchase the score as soon as I possibly could. The score is extremely appropriate for the type of film that Schmidt is: light, comedic, sad at times, witty, funny, and a hundred other adjectives that I don't have time or resource to fathom. From the first track, "The Adventurer," to the beautifully simple "Missing Helen," Kent literally transports us musically on the journey that Schmidt takes in the film.

"The Fury of Schmidt" provides a wonderful and welcome change of venue, with a distinct Russian feel to it, enhancing the mood and humor in the film. The tracks involving Randall and his family, "Randall's Room," "Dinner With Randall's Relatives," and "Constantine & Schmidt," are delightfully and humorously bloated and lopsided, perfectly describing this odd, strange family that Schmidt's daughter is about to marry into. "Riverside Prayer," "Omaha Return," and "Nudge's Painting" are deep and thought provoking, while "Schmidt Revisited His Alma Mater" and "The End Credits of About Schmidt" are fun, if not life-affirming, to listen to.

Tacked on to the end of the album are a few bonus tracks: The wonderfully, upbeat "Afrikaan Beat," "Ndugu Letter," which features the hilarious narration of Schmidt's first letter to Ndugu coupled with Kent's score, and fifteen minutes of Alexander Payne and Rolfe Kent talking about the score, their favorite cues, and inspirations behind why they used particular instruments and so on " all very fun and easy to listen to.

About Schmidt is one of the most enjoyable films I've seen, as well as one of the best listening experiences I've had in a long while; keep your eyes, and ears, on this Kent fellow. Though it is somewhat repetitive at times, the technique, style, and downright jauntiness Kent uses in telling the odd, wonderful tale of "About Schmidt" make up for it and then some. I loved this film, and I loved listening to this score. Both the film and the score span the spectrum: from light to sweet; from sweet to dramatic; from dramatic to comedic; from comedic back to light.  Alexander Payne does this well; Rolfe Kent does this well, and the result definitely shows.