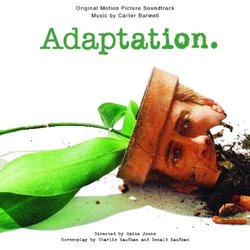 We open on Vaughn Gilstrap.

He is an older man, somewhere in his mid to late fifties, and slightly balding. His hands are on his head as he is tilted back in his burgundy leather chair, lost in thought, staring up at the British antiques and memorabilia sitting on a nearby shelf. In front of him sits a computer monitor, an older model, but adequate for his work. Open is a word processing program, with the cursor blinking on and off, on and off. The task before him is not an easy one, for he is to provide a review for the score of the recent Nicolas Cage/Charlie Kaufman/Spike Jonze outing, Adaptation.

He sits, staring at the screen. The cursor seems to mock him; on and off, on and off.

Time is of the essence; this review is late. What will he say? What can he say? And how will he explain the tardiness of this assignment to the "big cheese" over at SoundtrackNet? Having listened to the score not twenty minutes ago, it is no doubt still fresh in his mind. Thoughts pour in, but none adequate enough to use. He thinks some more. What would he say about this, the latest effort from composer Carter Burwell? What would he mention? Would he say that this is perhaps one of the most wonderfully dark, somber, and obscure scores to have come out of Hollywood yet? Would he mention that, in an odd and slightly warped sense, this is one of the best scores not only to emerge from Carter Burwell, but from all of Hollywood's elite brand of composers? Would he say that? No, no. Too emotional. Too "hip." Too un-Vaughn Gilstrap.

He pauses, looking at the monitor. The cursor stares back. On and off, on and off.

Vaughn pauses for a moment, a slight smile on his lips. He approaches the computer's keyboard and begins to type:

"We open on Vaughn Gilstrap."