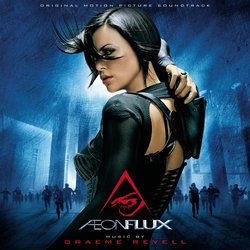 After the project bounced from Teddy Shapiro to Reinhold Heil and Johnny Klimek, Aeon Flux finally landed in Graeme Revell\'s studio, giving him another action flick to score in less than two weeks (remember Tomb Raider anyone?) Stylistically, the result is similar to Tomb Raider, with dominating electronics, but ends up being a more enjoyable listen. Beyond the electronics, Revell takes advantage of sliding cellos and solo vocals in the background to add an Asian feel ("Torture Garden"). Even some of the more ambient parts to the score have piano or other solo instruments accompanying the sounds, making the music easier to listen to ("Cloning Discovery").

"Grenade!/Monorail Chase" has some Enemy of the State or Spy Game-like electronic percussion that are appropriate for the content of this science fiction film. This sound returns in the beginning of "Oren Goodchild Dies" which ends with a quiet tone and female vocals. "Destroying the Memories" kicks up the action and pulls in all the elements of the score, from the sizzling electronics to pounding percussion and sliding strings.

"Aeon Flux" closes the album with an unusual sound of synthesized string ensemble. Overall, this score functions well in the film, but I know Revell is capable of better (the Riddick series as an example). Given more time, this may have relied less heavily on electronics, but is still a decent score by Revell, given the needs of the film.