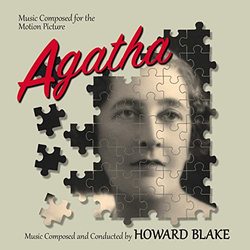 Dragon's Domain Records, to be distributed through buysoundtrax.com, will be releasing Agatha - Music Inspired by the Motion Picture featuring music composed and conducted by Howard Blake but ultimately not used for the 1979 feature film directed by Michael Apted and starring Vanessa Redgrave, Dustin Hoffman, Timothy Dalton, Helen Morse and Celia Gregory.

Dragon's Domain Records presents the world premiere release of Howard Blake's music for Agatha. While his music was ultimately not used in the film, it was composed during one of his most prolific years and worthy of preservation. The booklet contains liner notes written by noted author Randall Larson, including insights by composer Howard Blake on the creation of the score.