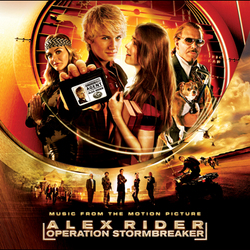 I love the Alex Rider books and, for one of the few times, it actually was translated to film pretty well, as author Anthony Horowitz wrote the screenplay. Alex Rider: Operation Stormbreaker has an amazing cast and some great action, it's a fun movie. The soundtrack album is a mix of rock songs and an electronic score that, while nothing groundbreaking, are decent in parts and pretty fun in others. Structured like a Bond film, the main title uses the song "Blame" by Transluzent, which I actually like. The second track, "Uncle Ian", the opening cue by composer Alan Parker, introduces the main theme during Ewan McGregor's major sequence and uses a bold, brassy sound over a racing electronic beat, which is fully appropriate for the genre and works very well in the film.

The remainder of the album is generally a number of unrelated and forgettable songs with the exception of two songs by the group Rooster. The other Parker score cues are fun and rehash a lot from the opening sequence. A particularly good action cue is "Get Me Out of Here" and then the closing, dramatic cue, "You Don't Belong to My World" is also good. This closing scene on the rooftop, however odd it may seem, is how the book ends (I had to go back and look it up) and I hope they make the other five books, because otherwise this sets them up for nothing. There is not much more to say about this soundtrack—it represents the music in the film well, and fans of this style of upbeat, modern rock and action music will like it. But it offers nothing new except for a few fun tracks.