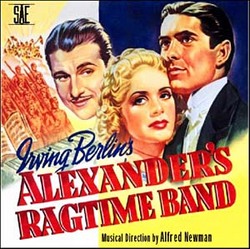 Alexander's Ragtime Band offers a star-studded cast (Tyrone Power, Alice Faye, Don Ameche, and Ethel Merman) in a sumptuous showcase for 29 fantastic Irving Berlin tunes, including the title song, "A Pretty Girl Is Like a Melody," "Blue Skies," and "Pack Up Your Sins and Go to the Devil."

The music begins rolling in San Francisco, where classically trained violinist Roger Grant (Tyrone Power) flouts his aristocratic family conventions to take up ragtime. He starts a band with composer Charlie Dwyer (Don Ameche) and singer Stella Kirby (Alice Faye). Over the next 30 years, two members of this triangle fall in love, a different two get married, one goes away to war, and the band breaks up and gets back together again. The lead role is based on the lives of George Gershwin, Irving Berlin, and Paul Whiteman. Director Henry King's Alexander's Ragtime Band was one of the first and is still one of the best "let's put on a show" films of all time. Love, loyalty, fame, jealousy, duty, honor, and country all play alongside each other as the spectacular cast bursts through this breathtaking showbiz epic.