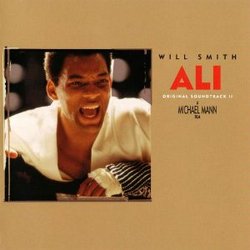 Ali, the highly anticipated biopic directed by Michael Mann and starring Will Smith, is a muddled attempt to show a portion of the life of the complicated boxing legend Muhammad Ali.  The usually outstanding director Mann never seems to find his focus with the story.   Mann seems to be throwing all of his ideas out there and assuming the audience will piece it together for him.  Because of this, the film never seems to find a balance between the public Ali and the personal Ali, and sadly, this cryptic boxing legend remains cryptic after viewing the film.  The first of two soundtrack albums to the film is as directionless and scattershot as the film, but surprisingly, the tighter second album is a well-managed blend of period, cultural and atmospheric pieces that make for a good listen.

Ali - Original Soundtrack II is a tight, versatile blend of soulful, older tunes, by the likes of Mighty Joe Young, more culturally focused pieces, like a piece by Salkf Keita, and more atmospheric score cues by Golden Globe nominees Lisa Gerrard and Pieter Bourke.  One would not think that this hodgepodge would work, but it does.  It is a very well-produced compilation, as the listener is led almost seamlessly from one genre to the next, and it makes sense in the end (far more sense than the film, I might add).  One gets a strong sense of Ali's world, though the music does not necessarily conjure the film itself.

That is probably the single sour note I would strike about the soundtrack.  It does not really make us recall the film very strongly, but I would not blame the soundtrack as much as the confused film.  Unlike the movie, the soundtrack is evocative and distinctive, so one could fault it, though not rightly so, for being better than its origins.

I would note that this second soundtrack seems much more focused than the first, so if you want a good listen of older and more progressive tunes, with some Afro-Pop thrown in, go with Ali - Original Soundtrack II.  Fans of the film will find some associations with the movie, but only vaguely; the best reason to get this one is definitely for the world of sound it creates.