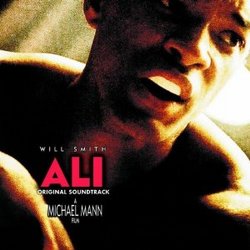 Ali, the highly anticipated biopic directed by Michael Mann and starring Will Smith, is a film filled with odd choices, including in the soundtrack itself. Much of the buzz anticipated sizzle form Mann and fizzle from Smith, but the film delivers the opposite, with Smith's charismatic Muhammad Ali wandering through a cold, emotionally barren cinematic landscape created by Mann. It is a film not sure of what it wants to be, and the same goes for the soundtrack which, though eclectic, has no unity or direction.

What we expect from the biopic of a well-known persona such as Ali is a view into the person's inner life—what we don't know. In this case: Why did he dodge the draft? Why did he go through so many wives? What was his relationship with Malcolm X really like? On the surface, Mann answers those questions. However, as you watch this three hour film, you never once really feel a part of this world, and the answers we get are ones we could figure out ourselves. Not a single relationship really resonates with the audience. The writers make a very bold choice to focus on only a portion of Ali's life, so you have to do your homework on where he came from, and then follow-up and find out what happened afterward, making the experience fairly unsatisfying. After a while, you realize Ali is more of a documentary than a drama, and it doesn't do a very good job at that. As a matter of fact, as the lights went up, my first reaction to my friend was "Boy, wasn't When We Were Kings a good movie?" Basically, Mann provides too much "what" and not enough "why" and "how".

As for the soundtrack, on the positive side, there is something for everybody, including work from R. Kelly, Alicia Keys, and Everlast, to name a few. The style moves from Soul to Hip-Hop to Rock to International Folk, and if you like variety, this soundtrack provides it. The real standout, both in terms of the film and the soundtrack, is "Tomorrow" by Salif Keita, which gives both a cultural and emotional richness when it comes up.

Ever since Miami Vice, Michael Mann has been known for his aggressive use of hit songs laid thick across his shows and movies, often to great success. However, like the film, this soundtrack has some interesting pieces, but ultimately lacks a pulse. And the variety here ultimately creates a striking lack of unity. It starts with a hokey, almost embarrassing, theme song, "The World's Greatest," by R. Kelly, and wanders through a dull collection of newbies and oldies, often by very talented artists such as Alicia Keys and Aretha Franklin. As with the film, there seemed to be this attitude that with such a great story as Ali's, they could just throw something together and it would work anyway. It does not. The result is bland and uninspired, despite the array of talent assembled. One track of the Golden Globe nominated score by Lisa Gerrard and Pieter Bourke is included, but hold out for the score release later this spring.

One has to be either a big Ali fan or a militant Michael Mann fan to want this soundtrack, and even in those cases, the soundtrack really does not make you recall the film all that much. Otherwise, it is just too disjointed and half-hearted to be enjoyable as an entire work, and it is very tough to recommend its purchase.