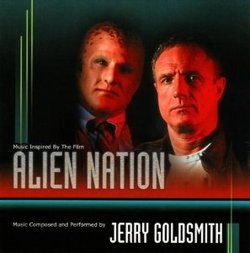 Film scoring legend Jerry Goldsmith was always a favorite in the realm of science fiction and fantasy. The Star Trek franchise notwithstanding, his compositions always seemed to transcend the works he scored for - be them for film or television. As a renowned maestro in combining electronic sounds with orchestral arrangements, Goldsmith was in his element during the late seventies and eighties when synthesizers became in vogue.

In 1988, the creator of SeaQuest DSV and the popular Farscape series, Rockne O\'Bannon, had his screenplay entitled, Alien Nation, turned into a film directed by Graham Baker. (The premise was that of the typical buddy cop variety with a palpable twist, one is human and the other, alien or "Newcomer".) Goldsmith had collaborated with the director when he scored the final chapter in the Omen trilogy, The Final Conflict, seven years earlier. Goldsmith\'s completely synthesized music was deemed too bizarre - or ironically, too alien - and discarded at the last minute in favor of a more common, regular style by Curt Sobel. For some time, a poor quality bootleg of the unwanted music was available to fans; although unsuitable for casual listening, the album was decent reference paraphernalia for hardcore collectors. Seventeen years later, and in light of the maestro’s passing, Varése Sarabande releases an official version of the unused and near-forgotten score.

Of the hundreds of scores composed, Goldsmith only really had six rejected in a manner that indicates production problems were to blame than his actual pieces. (Robert Townson of Varése goes to mention that the composer himself cared little that this forty-six minute score was ditched since (Goldsmith) already thought very little of the film.) If Alien Nation was the composer functioning on autopilot, it was clearly the spawning-ground for creative synth-work and developing motifs.

Given the tense relations between humans and Newcomers, Goldsmith\'s version of Alien Nation paints an anxiety-prone, austere environment with occasional respites of lightness and compassion. As heard in "Take it Easy" and "The Wedding", the theme from the composer\'s previous rejected work, Wall Street, was reused via synthesized sax for the sake of imbuing character poignancy. (This same theme\'s final incarnation would later be a live jazz trio - with the marvelous saxophonist, Branford Marsalis - in the tender, yet impassioned, love theme from The Russia House.) The motif, unlike any of the surrounding cues, gives the album a very emotive-eighties flavor. And despite its vibe of aloofness brought on by the use of synths, it\'s also the emotional pivot of both plot and score by providing soothing or lively ambiances.

Instead of treating the scoring as an exercise in composition, Goldsmith continued experimenting with unique electronic blends. It is with sheer inventiveness and borrowed bits and pieces of previous works that he manages to achieve a number of effects and moods without the use of real instruments. Flourishes of the fantasy score, Legend, add to the atmosphere of intrigue and eerie otherworldliness while fragments of The Explorers\'s funky "alien" synths find their way into "Alien Dance" and "The Beach". While the score is comprised mostly of music for action scenes, the cues, a mélange of sensations, are cunningly manipulated by versatile, aural textures to express anxiety, peril, pluck, or righteousness. One can even hear the start of sound designs that later appear in Total Recall.

On the whole, this album is a genuine collector\'s item for fans of the composer or anyone interested in the development of styles. With the then-pending Russia House love theme as the main highlight, the score for Alien Nation is also appealing because it was performed by Goldsmith himself. It\'s certainly not an award-winning album nor should it be considered a milestone composition, but for anyone interested, it\'s a neat experience - especially without the accompanying film.