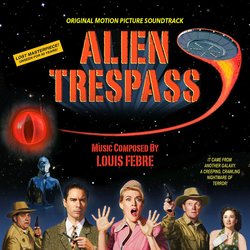 Alien Trespass is a 2009 science fiction film masquerading as a 1950's science fiction thriller. It's not a spoof, homage, or even parody. It very carefully emulates the style of 1950s science fiction cinema, in all its earnestness and inadvertent silliness. The film's plot follows an alien spaceship crash landing in the Mojave Desert. Its pilot, Urp, is the equivalent of a federal marshal on Earth, who enforces security in the quadrant of space our solar system happens to occupy. He is on assignment to capture a Ghota, a voracious one-eyed creature which is known to divide into numerous replications which can quickly overrun a planet such as ours. During the crash the ravenous Ghota escapes, and Urp is forced to inhabit a human's body in order to track and capture the Ghota before it is able to divide and spell doom for Earth's civilization.

The film's Seattle-based director R. W. Goodwin's Hollywood pedigree includes serving as co-executive producer, writer, and director for television's The X-Files from 1993 to 1998. While stock library music accompanies the film's prologue and newsreel footage, composer Louis Febre was brought in to compose an original, very 1950's style score for the film, replete with soaring Theremin, succulent string passages, expressive brass gestures, and dramatically rolling percussion. The film's budget would not allow a live orchestra to perform the score, but Febre was quite content to create the music using digital samplers, as he had done with Mark Snow on their previous collaborations. There were two instruments that Febre knew he needed to record live, however. Virtuoso Thereminist Rob Schwimmer was brought in from New York to play the instrument on the score and Febre also contracted cellist Emily Wright to play on the score, particularly for the more romantic/evocative music. While preparing his score, Febre spent time revisiting some '50s science fiction films to thoroughly acclimate himself to the essence of '50s monster movie music.