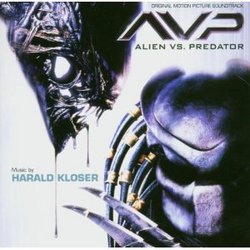 The Alien franchise has benefited by the visions and talents of different directors and composers for each film: Jerry Goldsmith set the tone of pure horror for the original Alien; James Horner provided a militaristic suspense score for James Cameron’s sequel, Aliens; Elliot Goldenthal brought a different approach for Alien 3, utilizing a boy soprano vocalist and racing strings for a darker, dramatic score; and John Frizzell threw in his two cents for Alien Resurrection with a largely orchestral action score. The two-film Predator franchise both had percussive scores by Alan Silvestri. These six science fiction monster films spanned three decades and some of Hollywood’s greatest musical talent.

Now, in 2004, we get Alien vs. Predator. Generally, Kloser puts aside the work from previous franchises and treats AVP as a new series, at least musically. This is not a surprise, as none of the Alien movies shared many musical parallels either. For this newest monster flick, we get the most anthemic main title of any of the previous films. Kloser's AVP resembles his The Day After Tomorrow score more than anything else, with sweeping themes, crackling electronics, and a large orchestra and chorus to fill out the sound. While the AVP theme is used on numerous occasions, most of the album is mindless action music. Like Alien Resurrection, this score lacks the ingenuity of the previous trilogy and the Predator scores, which all shared a strong sense of rhythm in place of thematic content. Kloser throws in some interesting percussion cues ("Antarctica" and "Down the Tunnel"), but more as a sound effect than a consistent motif.

To give credit where credit is due, Kloser’s score for AVP is better than I expected. The music ranges from pounding action to quiet reminiscence and everything in between without feeling extremely non-cohesive. There are some fine moments on the album, which could make is purchase worthwhile. Besides the opening and closing credits, two cues stand out: "Antarctica" is a moving and anthemic adventure cue and "History of the World" is a brooding piece accompanying a flashback scene in AVP History 101 that builds into a percussion-driven brass cue. Overall, Kloser wrote a score for what the film was: not quite as loud as Alien Resurrection, but not nearly as intelligent as the original Alien or Predator. Having put it that way, if you enjoyed the film, the album is probably worth looking into, as there are some better-than-average cues hidden there.