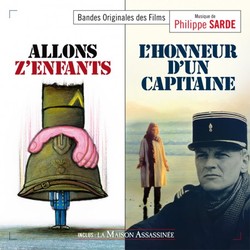 For La Maison assassinée, Georges Lautner once again requested the services of his friend and collaborator Philippe Sarde. For this story of revenge and mystery, the composer provided an efficient, lugubrious and seductive score in order to musically illustrate this "Provençal gothic". Allons z'enfants, directed by Yves Boisset, is a coming-of-age story and an anti-military pamphlet. Recorded by the London Symphony Orchestra, the music showcases swift and luminous brass band performances with some lyrical passages. L'Honneur d'un capitaine marks the second collaboration with Pierre Schoendoerffer, after Le Crabe-Tambour. For this courtroom drama about a dead Captain whose memory is publicly damaged, Sarde composed a very short and elegiac score, for choir and orchestra, and beautifully performed by a plaintive solo violin.

The program has been assembled, produced and supervised by Philippe Sarde and Édouard Dubois. This present edition has been fully remastered from complete scoring session elements and includes previously unreleased tracks. The CD comes with a 12-page booklet with liner notes by Christian Lauliac, discussing the films and the scores including new comments by Philippe Sarde on his collaboration with the three directors. The release is limited to 500 units.