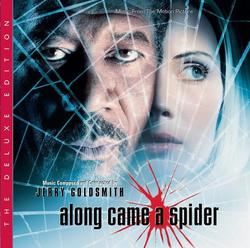 Along Came a Spider - The Deluxe Edition

One of Jerry Goldsmith's final film scores comes to the CD Club in a long-awaited Deluxe Edition: Along Came a Spider (2001), Paramount Pictures' second film adaptation of James Patterson's Alex Cross thriller novels, although taken from the first book. Morgan Freeman reprised his role as Cross (from Kiss the Girls), teaming up with Monica Potter as a Secret Service agent in search of a U.S. Senator's daughter, who is kidnapped by a twisted adversary.

Goldsmith reteamed with New Zealand-born director Lee Tamahori, for whom he scored The Edge (1997), and provided a tense, taut score in his thriller wheelhouse. From his earliest days scoring television, to 1970s landmarks like Capricorn One and Coma, to the granddaddy of the 1990s sex thrillers, Basic Instinct, no composer was as fluent or effective with the thriller genre as Goldsmith. By 2001, the composer had modernized and refined his suspense style to the point where there was not a single wasted note. Along Came a Spider pulses and twitches with uneasy throbs, lurching into orchestral action for moments of shock and violence, and nobly sets a powerful French horn theme (for the forces of good) against a brooding tapestry of darkness—all while the clock ticks away on a young victim's life.

Released as a 35-minute CD by Varčse Sarabande at the time of the film, Along Came a Spider is expanded for the Deluxe Edition to the complete 64-minute score, in film sequence. A bonus track of outtakes (including Goldsmith's chit-chat on the scoring stage) is curated by Goldsmith's longtime friend, recording engineer and album producer Bruce Botnick.