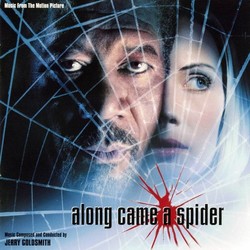 Along Came a Spider

Review: Along Came A Spider

Jerry Goldsmith's latest score since Hollow Man (his only film of 2000) is for Lee Tamahori's film version of James Patterson's hit novel "Along Came A Spider".  Essentially a prequel to Kiss The Girls, Along Came A Spider focuses on forensic detective Alex Cross (Morgan Freeman) and Secret Service Agent Jezzie Flannigan (Monica Potter) as they search to find a kidnapped congressman's daughter.  Calling for plenty of tension, suspense and drama, Goldsmith's score dutifully does the job, but doesn't do much beyond that - and the result is a serviceable score that isn't too much to listen to on the soundtrack album.

Synth effect flutters and snippets of strings mixed with atmosphere for three minutes is all you get for the first track, "Night Talk".  This is followed by "Testing", in which there at least is some more interesting material.  But the use of the horn section followed by pounding percussion is starting to become a rather familiar Goldsmith device, and while the cue is effectively tense, it's not very gripping due to the sense that we've heard it before.  "Alone" is a quiet, more somber piano bit - but it doesn't really add up to more than a sense of rain (the dissonance reminds me a bit of the piano bits in Blade Runner).  "Megan's Abduction" and "Megan Overboard" are (once again) tense cues that service the point, but never feel truly inspired.  Even in "The Ransom", when the more thematic material rears its head, I kept thinking that Goldsmith was on autopilot.

The album to Along Came A Spider runs about 35-minutes long, and that's just plenty.  No expanded album is necessary for this one, and I can't truly say that you should rush out and get it.  While a film score's one true purpose is to serve the film (in that regard Goldsmith has done his job diligently), the truth is that we're looking at a soundtrack here, and there is no visual element in sight(beyond the CD cover).  Goldsmith has certainly done better scores in the past few years, and I can only hope that his work on The Castle and Domestic Disturbance are more inspired than the unimpressive score to Along Came A Spider.