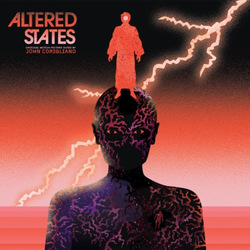 The audio has been sourced from the original masters, and this new LP re-issue has been officially and enthusiastically approved by the composer.

The album artwork is created by Australian artist duo, We Buy Your Kids, and the heavyweight old-style gatefold jacket features a deluxe Glitter Coating.

Exclusive liner notes have been provided by composer John Corigliano and are featured on a 12"x12" insert with artwork by We Buy Your Kids.

The re-mastered-for-vinyl Grammy nominated score has been pressed to 180 Gram Purple and Violet "Hallucination" Swirl vinyl and sounds incredible.