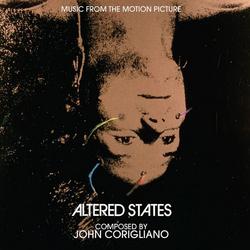 La-La Land Records and Sony Music are proud to present a newly remastered soundtrack to one of the most unique scores of the 1980s—Altered States.

This ground breaking score has been completely remastered by Mark Wilder at Battery Studios in New York. Composer John Corigliano supervised the production to ensure that his landmark score sounds better than ever! Brand new liner notes by Jeff Bond feature interviews with editor Stuart Baird and composer John Corigliano as they take you behind the scenes of one of the most influential film scores of the 1980s. Crisp, detailed, and vibrant not only describe this newly remastered CD, but also art director Dan Goldwasser's impeccable art direction. A must have for any true film score fanatic! As per Mr. Corigliano's request this CD features the exact program of the LP and does not contain any additional music.