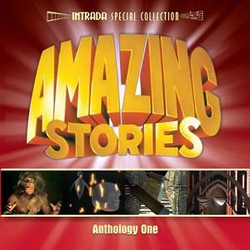 For those who came in late, here\'s the story. In the eighties, Steven Spielberg produced a television anthology show in the vein of "The Twilight Zone", surrounding himself with a roster of impressive names in directing, writing, acting... and film scoring. "Amazing Stories" was a unique phenomenon that has little chance of recurring in these days of computer-driven television scores and budget restrictions. While Varèse Sarabande had previously released a CD of re-recordings of two episodic scores to the series, fans of the show have had to wait approximately twenty years for Intrada to start making available these stellar, two-disc anthologies, presenting the original recordings of the series\' highlights.

Main Title: A catchy fanfare opens the title sequence before we are led into the flighty main theme for brass. It is then taken over by the strings for a romantic transition before the trumpets claim it again over exotic percussion. The coda is a fast brass rippling fanfare in the tradition of Star Wars. Pure John Williams, and a fan favorite. The bumper music which links the two discs of the album is a slow reprise of the opening fanfare for solo brass instrument over a sustained string chord, while the end title features an accompanying piano and a gentler version of the main theme.

Ghost Train: John Williams scored the pilot episode directed by Steven Spielberg about an old man returning home to board the phantasmal remains of a train he inadvertently caused to derail decades ago. The roots of what would later become Anakin\'s Theme in The Phantom Menace serve as one of the two main themes, an innocent melody frequently carried by the flute over multiple harp arpeggia. Woodwinds and strings frequently entwine to yield a score typical of Williams\' pen: a theme-based musical tapestry with adventurous streaks and quiet, docile writing that often hints at mysterious happenings while always preserving a child-like innocence. Hardly a masterpiece coming from Williams, it nonetheless possesses charm and displays Williams\' proficiency in the genre.

Alamo Jobe: The fun really starts with James Horner\'s Western score to "Alamo Jobe", which finds a teenager fighting at the Alamo transported to the 1980s. The main theme is electrifying and memorable and Horner employs snare drums, rattling percussion, and a harmonica to back the orchestra\'s most heroic moments. The most peculiar sequence comes in the second half of "First Chase" as the theme is voiced by the trombones over frenzied trumpet and harmonica figures. Easily one of the album\'s most adventurous and catchy scores.

Gather Ye Acorns: The harmonica flawlessly carries us to the next score, Bruce Broughton\'s bluesy and All-American music for the Steven Spielberg story about a young boy who goes against his parents\' wishes and follows the counsel of a tree troll. The funniest thing about the score is how Broughton uses the harmonica as the musical anchor in each of the three time periods (1938, 1955, and 1985) while adapting the main theme and its accompaniment to reflect on the epoch\'s pop music. A light score at first listen, it is surprisingly complex and well rounded, dabbing in 30s jazz, Americana, 80s guitar-heavy rock blues, country source music, and even a hint of traditional Irish music to represent the gnome. A score deserving of a couple of spins to fully appreciate it.

The Doll: John Lithgow stars as a lonely man who begins to fall in love with a doll that was meant as a gift for his niece in a story penned by Richard Matheson. George Delerue\'s sentimental magic is perfect for this story. He creates a warm and somewhat tragic sound for this miraculous love story, bathing the listener in his trademark string harmonies and music-box-like melodies for glittering instruments. Not unlike the quiet moments of Delerue\'s own Joe Vs. The Volcano, his score for "The Doll" is pure condensed magic, romantic without becoming sappy, warm without becoming choking. A delightful "demo" for anyone interested in hearing Delerue\'s style and a highlight of this anthology.

The Amazing Falsworth: An unnerving horror score by Billy Goldenberg graces this story about a magician played by Gregory Hines who can tell who people are just by touching them and who just happens to touch a serial killer who is seeking refuge from the police inside the night club where Falsworth is performing. Goldenberg\'s main theme is an innocent music box melody for piano accompanied by highly dissonant string harmonies in the background, creating an atmosphere of tension and dread. Another great selection for this anthology and the first all-out suspense score to grace its line-up.

Moving Day: The second disc in this anthology opens with quite a change of pace: David Shire\'s synthesizer-heavy score to the second season\'s penultimate episode, "Moving Day", about a teenager who learns he and his family are moving... to the planet Alturis. "My God!" is particularly epic, mixing strings and tinkling synth bells to lead us into a breathtaking climax. The rest of Shire\'s score is quite beautiful, adroitly balancing flute-and-strings Americana with 80s sci-fi synthesizers.

Without Diana: If "The Doll" was uplifting and romantic, this Georges Delerue score is definitely downbeat and melancholic. To score the story of a dying wife whose eight-year-old girl returns after having disappeared decades before, Delerue uses solo woodwinds, thick strings, and a harp. The acoustic guitar makes an appearance in "George in the Doorway/Diana\'s Story" in a beautiful cue reminiscent of "Dinner with Dee Dee" from Joe Vs. The Volcano. Once again, the composer achieves sentimentalism in the best of senses, his music never becoming trite and overwrought while indulging in Romantic idioms and sepia-tone finishes.

Mummy, Daddy: If you have a silly episode about an actor dressed as a mummy running around town in full Egyptian regalia to arrive in time for the delivery of his baby (a story that apparently happened to Boris Karloff as he was shooting Son of Frankenstein), who do you get to deliver a quirky and off-the-wall score? Why, Danny Elfman, of course! B-movie music references abound in the first track before we are hit with an assortment of country fiddles, bouncy Jew\'s harps, rattling shakers... and is that a calliope in the third track? There might even be a kitchen sink in there. "Mummy, Daddy" is Elfman in full-on, mid-eighties sound experimentation mode, coming up with quirky motifs, unconventional percussion instruments, and wild chase sequences. With a track title like "Kung-Fu Mummy", one should not expect the tear-jerking music of Delerue, here. This is early Elfman: zany, crazy, and loveable, with not an ounce of seriousness.

Vanessa in the Garden: Lennie Niehaus scores this Clint Eastwood-directed tale of a brilliant artist who survives the carriage wreck that kills his wife and discovers that a painting of her is haunted by her presence. It is, perhaps, the most saccharine and least memorable score of the anthology, lacking a distinct identity. It is by no means bad but it does pale in comparison to the previous scores, all of which carried the signature of their respective composer. The main theme here is often played as a traditional dance and is reprised beautifully in the last track, "Vanessa (Piano - with Orchestra Coda)". Niehaus\' score is very classical yet also, perhaps because of this, somewhat conventional.

Welcome to My Nightmare: Bruce Broughton\'s score to the episode where a movie addict ends up in the movie Psycho ends this first anthology. One might expect a direct spoof of Herrmann\'s classic score to Psycho but, apart from a synth rendition of the murder motif, Broughton\'s score is a different beast. It is led by what I like to call the "Doogie Howser" synthesizer (which seemed pretty prevalent in the eighties), accompanied by a small orchestral ensemble. Along with Shire\'s "Moving Day", it is the most dated of the episodic scores and is not on the same level as the other Broughton contribution on the album, "Gather Ye Acorns".  It is puzzling why this score was chosen over so many others, especially as an album closer.

Amazing Stories: Anthology One is an enjoyable album that has a broad reach. Fans of the original series will no doubt want to snatch it. Film music aficionados who prefer traditional scores set in lush orchestral locales will take a fancy to it. And people new to film music who want a sampling of the greats will most likely find something to their taste. The sound quality is great and it is a mystery why it has taken so long to release so much of this music given how special the project was to begin with. While the scores themselves are never masterpieces, they serve as introductions to famous composers\' bodies of works and rare side dishes for collectors who can\'t get enough of the big names of the film score industry.