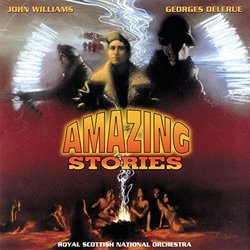 A series like none before and probably none that will follow it has spawned this latest release by Varese Sarabande. "Amazing Stories", a brain-child of wunder-director Steven Spielberg, is a fantasy/humor/drama series that allows many novice directors, and even some established movie stars, a chance to direct some of the most original and unique stories ever put to paper. The themes and format ranged from science fiction and comedy to live action and animation, a first for any television series. This also allowed for some famous and some no-so-famous composers to write some of the best music of their careers. Composers such as Danny Elfman, Thomas Newman, Bruce Broughton, and Jerry Goldsmith loaned their talent to this series, two of which, John Williams and the late Georges Delerue appear on this disc.

The two episodes represented here, "The Mission" (Williams) and Dorothy And Ben (Delerue), are some of the most memorable and best of the entire series. I personally remember The Mission, truly a poignant story about the last flight of bomber squad in WWII who runs into a problem when their landing gear and belly turret door become jammed. Their cartoonist and resident good-luck charm belly gunner passes the time drawing and hoping for a safe landing, draws his dream, which, in Spielberg fashion, comes to life. John Williams, in his time between his late 80’s period of Witches Of Eastwick and Nixon and his post-Indiana Jones stint, writes a truly transitional score. Action cues hark back to his work in The Temple Of Doom and others foretell some of his work in Always, another epic involving planes that arrives in 1989. Here presented by Joel McNeely in almost note by note precision to the original score recording is a nice treat to any listener.

A nonetheless poignant episode scored by Georges Delerue, "Dorothy And Ben" tells the tale of two hospitalized patients who switch their time in life threatening comas. Written after a recent creative drought, Delerue’s work on this score helped bring him to the attention of Hollywood again and allowed him to compose some of his most memorable scores (Platoon, Joe vs. The Volcano, and Steel Magnolias). Under the direction of Mr. McNeely again, the Royal Scottish National Orchestra treats this with as much care as their work on Williams’ "The Mission". A nice part two to a long awaited CD.

Two well-awaited pieces, the "Main" and "End Titles" to the series, composed by John Williams are nice bookends to the CD. I would only hope that this is only the first volume in re-recordings of music from the series, a true landmark in television, and landmark in scoring.