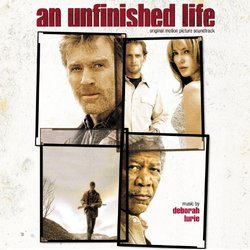 I know Deborah Lurie as the creepy voice of the scared kid in the "Rest Stop" cue from John Ottman's partially-rejected score to Halloween: H20. When I hear that name, Deborah Lurie, this bouncy, childish vocal motif is what starts playing in that perennial jukebox of the mind. I think it is fair to say she has spent a number of years in John Ottman's shadow which is, I guess, as nice a shadow as one could ask to spend any number of years in. She has accumulated a small body of work, scoring independent pictures, little seen movies like Whirlygirl, Sleepover and Drop Dead Sexy. Her score to 2004's Imaginary Heroes was built around a theme composed by John Ottman, but for this year's An Unfinished Life, she is on her own, traipsing on the calm and serene musical pathways that Ottman has said he yearns for, far away from psychological terror and murdering impulses.

The movie itself concerns a bitter man played by Robert Redford, still angry at his son's death, and forced to take in his estranged daughter-in-law and her own daughter, a family drama set against the gorgeous backdrops of Wyoming (or, more accurately, the gorgeous backdrops of Alberta and British Columbia standing in for Wyoming because, really, who can tell the difference these days?). Lurie certainly let herself be inspired by those stunning American (err, Canadian) landscapes, crafting an intimate and refreshing score making strong use of guitars, acoustic and electric, fiddles, and some light acoustic percussion, backed by a small string ensemble and a piano, with occasional woodwind touches. Two themes act as the building blocks of the score, hummable melodies with a distinct Thomas Newman touch both in melodic approach and orchestrations, proving once again that Newman's post-American Beauty style has had a noticeable impact on film music trends.

All those guitars strumming, and fiddles glissando-ing, and electric guitar touches... well, it's definitely a question of timing, but I will go ahead and recommend An Unfinished Life to those fans who enjoyed Greg Edmonson's score to Firefly and now wish Newman's score to Serenity, which eschewed most of the Western touches of the series, had sounded like a broader, slightly more mainstream version of Edmonson's folksy tunes. The score to An Unfinished Life definitely achieves this warm, careful balance between all-out country western and traditional orchestra that some fans of Firefly might take a liking to.

It's impossible for me to spotlight a particularly grandiose track, any highlight for that matter, since the score, as heard on the 35-minute album, is an organic whole, one where every track contributes equally to the impact the score has on you. The tempo is steady, picking up lightly in cues with driving percussion, but never reaching zany speeds or sleep-inducing lentos. Lurie shows she can compose a folksy score with a heart that never becomes clichéd or overbearing, relying on the genuine sweetness and tenderness of American folk instruments and effective melodies. She might not be showcasing an original voice yet, but her talent is undeniable and her music addictive. What could have turned into a saccharine affair reveals itself to be a solid work worthy of the "repeat" button.