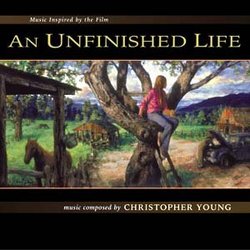 Just like that Exorcist: The Beginning fiasco a little while back, here is an opportunity to study two different perspectives on the same material. Lasse Hallström\'s film was patiently awaiting its release, sitting on a shelf somewhere with music by Christopher Young; then, before its theatrical release, most of Young\'s score was thrown by the wayside and replaced by new music by Deborah Lurie, a long-time collaborator of John Ottman and a film composer of her own. Lurie\'s score, which was released by Varèse Sarabande and which I reviewed a while back, can now be put side by side with Young\'s, now a limited Varèse Club release. Some people will inevitably call veteran Young\'s score a much superior effort to Lurie\'s, which may be unfair given Lurie\'s short work time frame. Both scores are enjoyable and well crafted and, while they both draw on the same musical heritage to serve as their backbone, their ultimate effect couldn\'t be more different.

Traditional elements of Western music are present in both scores, although they might be more easily perceived in Lurie\'s score which makes abundant use of the instruments of the genre (fiddles, guitars, and hand percussion) and its harmonic progressions. Young uses the locale in a more subtle fashion and most notably in a stand-out cue called "Unfinished Life", which exposes an infectious main theme born on a solo acoustic guitar soon to be backed by gorgeous string lines. A clean electric guitar takes over the theme, accompanied by acoustic strumming and whistle calls. While Lurie\'s themes were memorable and effective, Young\'s main melody is even catchier, if used more sparingly. The quirkier cues in both scores make use of subtle blues harmonies, shakers, and assorted tingling percussion but, while Lurie let her themes take center stage, Young prefers to compose incidental melodies and diversify his thematic material. The violin, a trademark of Lurie\'s soundtrack, makes fewer appearances in Young\'s musical landscape: it provides a touching color to the cue "Everybody Needs Love", over a quiet piano and guitar duet. Young\'s score proper ends on a musically strong and uplifting tone with two cues, "Sins of Happiness" and "We Begin at the End Again", great pieces that recall the main title in both melody and instrumentation.

The major difference between the two scores lies perhaps with the piano. Varèse\'s release of Deborah Lurie\'s official score focuses on the more overt and quirky material; their limited edition of Christopher Young\'s score is definitely quieter and more reserved and shows a certain refinement over Lurie\'s score which is proof of the composer\'s talent and years in the business. The meat of Young\'s score is not found in the gorgeous musical homages to Wyoming but, rather, in the homey piano pieces which contain much of the emotions of the score. Nowhere is that more evident, in fact, than in the composer\'s "14 Unfinished Lives" exploratory work, 27 minutes worth of melodies for solo piano where Young states themes that were and were not used in his score. It is interesting to hear a piano-only rendition of the main title, where the rapid bluesy grace notes decorating the theme are made even more evident. In this bare-bones work and in most of the piano pieces in the score itself, Young presents delicate and intimate music that is not easily accessible to the MTV generation but which requires one to sit down, put one\'s headphones on, and take the time to appreciate its complexity and maturity.

I was not one of those critics Varèse mentions who booed Lurie\'s score thinking it was Young\'s; I actually very much enjoyed Lurie\'s score. It\'s a catchy, fun, and mainly extraverted soundtrack that I like to listen to on a semi-regular basis. Young\'s rejected score to An Unfinished Life is not as easy to pop in and listen to while working; because of its intimacy and restraint, it requires a pause and an attentive listen. It\'s the difference between a careful score with months of research on its back and a last-minute replacement job. Both might be good listens, but there\'s always a little something more in the former, a refinement that to the ears tastes like a good aged wine.