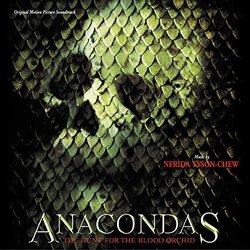 Anacondas: The Hunt for the Blood Orchid

Performed by
The Studio Orchestra of Sydney

Review: Anacondas: The Hunt for the Blood Orchid

I wasn't under the impression that the first Anaconda was good enough to warrant a sequel. Regardless, seven years later, we get one, complete with a nifty subtitle: Anacondas: The Hunt for the Blood Orchid. The film is not even really a sequel, with none of the surviving cast from Anaconda returning, though it was penned by the same screenwriters. The first film took place in the Amazon while the sequel is located in Borneo. A final difference is in the choice of composer. Relative newcomer Nerida Tyson-Chew takes over for Randy Edelman on the sequel and manages to pull together a very good soundscape, which is better than the film probably deserved.

Tyson-Chew is best known for her work on the animated series, "Batman". Her score for Anacondas is actually better than Edelman's music for the first film, in that it maintains a level of interest, rather than fading into filler music. While it contains some of the same creepy, Predator-growl-like electronics and woodwinds as Edelman's Anaconda, Tyson-Chew adds two very key elements to the mix: large Asian percussion and a strong brass presence. It is a functional score and its strength lies in the fact that it is more organic-sounding than Jurassic Park or Beyond Rangoon, though it does not have anywhere near the thematic development.

The album can be viewed as broken into three sections. The first is the "Opening Titles/Jungle Floor", which presents the main theme in full on the horns. The next three tracks continue this powerful approach, with liberal uses of percussion and woodwinds behind the theme, giving a very ethnic sound to the action. The romantic theme for the film appears in "Almost a Kiss" before the action takes over again. The second part of the album accompanies the parts of the film where the snakes are stalking and picking off the humans, tending toward a more horror genre sound, but always maintaining the ethnic feel. "Enter the Jungle" is a short, but ominous cue, very well suited to entering a nasty place. The main theme picks up again later in the score in "All Hope Is Gone", which is one of the best cues on album with a moving percussion beat backing the horns.

The final section consists of three cues, but encompasses more than a third of the music, with both "The Cavern" and "Climbing to the Light" coming in at over six minutes each and the last track, "Discovering the Orchids/Face-Off" totaling over eleven minutes. These final tracks begin with a quieter approach for the cave scenes, and then building into racing action music by the last track. "Climbing to the Light" contains trilling low brass and a new rolling rhythm on deeper drums, changing the tone of the score. The romantic theme comes back briefly at the end of this cue before the finale. The last track opens with a moving low string line over the percussion before segueing into low-key scoring until the second half of the cue where the music charges to the finish line for the face-off with the snakes. Brass and racing string lines take the score back to a full rendition of the main theme and less frantic, ethnic percussion.

For a relatively new composer, this score is a very good start. The epic scale and consistent ethnic orchestrations make this score better than what might have been expected based on Edelman's work on the first film. The structure and of the music is similar to Goldsmith's Congo, with primarily suspense music fused with ethnic elements, opening and ending with a powerful brass theme. Upon first listen, Anacondas: The Hunt for the Blood Orchid may be hard to listen to the whole way through, but it is one of the more refreshing scores of 2004 because of its unique, organic sound and consistent tone.