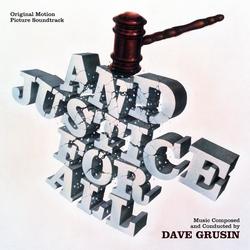 ...And Justice For All

The 1979 courtroom drama, …And Justice For All is best remembered for the brilliant line Al Pacino shouts out in court, "You're out of order! You're out of order! The whole trial is out of order!". The movie went on to great critical and box office success and was nominated for two Academy Awards. The score is pure Dave Grusin - funky, jazzy and melodic. The score was transferred from master sources from the Sony Pictures vaults. The CD contains the Mono film version of the soundtrack as well as the stereo remix along with bonus score tracks not used in the film.