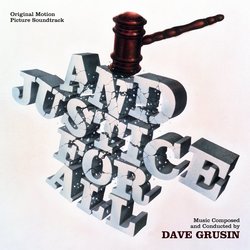 The 1979 courtroom drama, ...And Justice For All is best remembered for the brilliant line Al Pacino shouts out in court, "You're out of order! You're out of order! The whole trial is out of order!". The movie went on to great critical and box office success and was nominated for two Academy Awards. The score is pure Dave Grusin - funky, jazzy and melodic. The score was transferred from master sources from the Sony Pictures vaults. The CD contains the Mono film version of the soundtrack as well as the stereo remix along with bonus score tracks not used in the film.

The 1981 drama, Absence of Malice stars Paul Newman, Sally Field and Melinda Dillon. Newman, Dillon and writers Kurt Luedtke and David Rasyfel were all nominated for Oscars. This movie was one of many collaborations Dave Grusin had with director Sydney Pollack. The score was transferred from master sources from the Sony Pictures vaults.

Murder By Death & The Pursuit Of Happiness:

The 1976 film Murder by Death is among the most requested of Grusin's unreleased scores by fans. The satirical murder mystery was directed by Robert Moore and features an all-star cast of Eileen Brennan, Truman Capote, James Coco, Peter Falk, Sir Alec Guinness, David Niven, Peter Sellers, Maggie Smith and Nancy Walker. The score is a satire of murder mysteries and it rises to the task with a wonderful and melodic main title. The sources provided by Sony are in mono but sound superb. This is one of those scores you will be humming after listening to it. As a bonus we have added the music from the 1971 Robert Mulligan film, The Pursuit of Happiness. The movie stars Michael Sarrazin, Barbara Hershey and E.G. Marshall. The plot is about a young college student who is sent to prison for killing a pedestrian with his car. When the opportunity presents itself, he escapes and is subsequently on the run with his girlfriend. On top of the maestro's score, we have included the Randy Newman main/end title credit song, "Let Me Go," which is also used in variations during key moments in the film. Both scores were transferred from master sources from the Sony Pictures vaults.