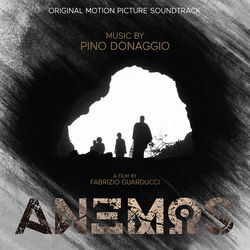 Anemos is a conceptual film in which, following the call to spirituality, we go through history on a trip from Magna Grecia to the Aeolian Islands, from the desert to the Cathar countries, observing the wind that rushes towards the Mediterranean. We follow it as it moves between the natural and the artificial, from rocky hermitages to overcrowded contemporary cities, to the stratosphere where we meet Gaia, the creature that breathes cosmic air and feeds on the Universe. The winds are her circulatory system and protect us until, quoting the Apocalypse of John, the four angels close the mouth of the winds.

Una sconosciuta is a romantic and intimist film about city damaged hard by the epidemic and isolation, when suddenly a beautiful woman appears whom no one knows but who fascinates everybody. Slowly but almost inexorably, the city comes back to life.

Maestro Donaggio has composed two deepled, melancholic and emotional scores that, despite the difference in the periods of both films, complement each other in the essentials: the human fragility.

Both scores have been recorded with the Rome Symphony Orchestra, Anemos conducted by Gianluca Podio, and Una sconosciuta under the baton of Maestro Natale Massara. The music has been recorded and mixed by Marco Streccioni, who has also mastered the album.