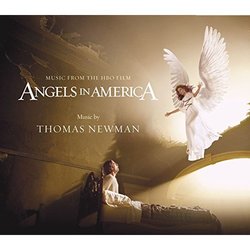 "The oboe. The official instrument of the International Order of Travel Agents. If the duck was a song bird, it would sound like this: nasal, desolate, the call of migratory things. "
- Mr. Lies to Harper Pitt, Perestroika IV, Angels in America

This quote from the HBO-produced Mike Nichols film Angels in America is typical of much of the script – quirky, intellectual, and hinting at deeper personal unrest. The concept of "migration" in man's personal affairs – of people fleeing their loved ones in time of need – lies at the heart of the searing Tony Kushner play from which the film is adapted. Stricken with AIDS in New York of the late 1980s, Prior Walter (Justin Kirk) is abandoned by his lover (and self-loathing non-practising Jew) Louis Armstrong (Ben Shenkman). The latter flees into the arms of gay Republican Mormon lawyer Joe Pitt (Patrick Wilson) whose marriage to the delusional Harper (Mary-Louise Parker) is on the rocks, even as he draws closer to the AIDS stricken closet-bound doyen of the Right, Roy Cohn (Al Pacino). Into the lives of each of these characters, and especially Prior Walter, come the Angels of America who, unable to keep up with affairs in light of God's abandonment of the world (this happened in 1906 apparently), demand (through Emma Thompson) that Walter deliver a message to the masses: stop the migration of people from one relationship to the next. Meryl Streep also figures into affairs in no fewer than four roles – Pitt's devout Mormon mother and Cohn's personal demon Ethel Rosenberg among them.

It's a heady brew to be sure, and not for all tastes. It is the ideal project for Thomas Newman though. Newman has stated in the past that his scoring is often more about "subtext" than "parallel comment" – i.e. more about underlining and deepening the audience's experience of a scene than to tell them what's happening with music as well as pictures. That is genuinely what this film needs. The average viewer of Angels in America doesn't need to be told that they are watching a strange film. What they do need is a musical score that will help them identify with the surreal situations depicted. And Newman's great work does precisely that, illustrating and commenting on the themes of Kushner's screenplay with effortless grace.

Taking his cue from Mr. Lies, the oboe – "the call of migratory things" – is central to Newman's three main themes. His theme for America and the spirit of pioneering is the centrepiece of "Angels in America (Main Titles)", which is dominated by a beautiful dialogue for oboe and string orchestra, ending with superb choral and brass harmonisation. Appearing more frequently in the film than the album, it becomes a motif for Mother Pitt's reluctant but compassionate entry into Prior Walter's painful world, appearing again in "Mormons" in a beguiling duet for guitar and fiddle. There is also a theme for the idea of emotional migration, first presented for oboe and strings in "Ellis Island". It a gorgeous piece along the lines of the family theme from Finding Nemo, in the film accompanying situations that illustrate the idea of characters cutting free of their loved ones and moving on with life. On the album this theme appears again for strings in "Bethesda" and for female vocalists in "Tropopause". The counter-pointing of the two vocalists and strings in the latter is particularly lovely.

The highlight of the score is the oboe, clarinet and string based theme for Prior Walter's angelic mission, and Newman uses it well to illustrate the change in emphasis of that mission over the course of the film. In "Ozone", the bittersweet theme accompanies an attempt by one of the characters to fulfil the angelic instruction and restore a past relationship. As Walter comes to reject his prophetic office and desire only "More Life", Newman's use of this theme in that cue communicates that Walter really has discovered a calling greater than that place upon him by the Godless angels. "The Great Work Begins (End Title)" offers the most extended development of the theme, and is surely the masterpiece of Thomas Newman's career to date. Coupled with "Tropopause" (which follows without a break), even if the rest of this score was rubbish, this finale piece would justify the purchase. Comparisons to George Delerue's Agnes of God or Wojciech Kilar's Portrait of a Lady are not without merit.

Of course as with most of Newman's scores, the rest is not rubbish. To represent the presence of Kushner's profane but well-intentioned angels, Angels in America features Newman's most extended use of choral elements since Oscar and Lucinda. A boy soprano singing from the Requiem mass signals their presence in "Threshold of Revelation", "The Broom of Truth", "Plasma Orgasmata" and "Garden of the Soul". For the fiery copulation of angels – the "Plasma Orgasmata" – only a breathtaking string and choral epiphany will suffice and it appears in the latter two cues. Newman's work in these cues is crucial to giving Kushner's angels a sense of seriousness that their actions tend to subvert on screen. Elsewhere some of the choral writing borders of baroque pastiche ("The Infinite Descent"), which undermines the seriousness of proceedings slightly.

A half hour score based on the above elements would doubtless be regarded as the best score of the year by fans of orchestral film music. Potential buyers should note that the album does contain about thirty minutes that is quite removed stylistically from those elements described above. Newman's flare for ambience is evident in the subtly melodic "Quartet" and "Mauve Antarctica". American Beauty style mixtures of guitar and marimba add offbeat colour with "The Ramble" and the Flamenco-flavoured "Spotty Monster". There is some truly Goldenthal-like action writing for choir and guitar in "Her Fabulous Insipience" and "Submit!". These together with the dissonant brass and percussion of "Black Angel" make me wonder what sort of scores Newman might write were he not solely given to scoring quality dramas. And of course there are plenty of cues ("Umdankbar Kind", "Bayeux Tapestry") where Newman's strings and woodwinds just wander, ever looking for a resolution that is always out of reach.

While for this reviewer the album's eclecticism only adds to its flavour, others may want to survey the breadth of the score before purchasing. The score is well performed and mixed, the album from Nonesuch including three source cues in addition to a generous helping of Newman's score. Their inclusion does not greatly interrupt the flow of the album (probably because it is so eclectic), but one wonders why Mancini's "Moon River" (used so effectively in the film) wasn't included. I also wish that some of the good unreleased cues had found their way onto the disc in their place. In any case, it's the best of the year. It's hard to believe that after two such powerful works as Finding Nemo and Road to Perdition that Newman has so successfully raised the bar with this score. In part the slightly deeper-than-average source material must be credited, and this work will probably standout as a highpoint in Newman's body of work in years to come.